Professor of Biochemistry, Biophysics and Structural Biology Jennifer Doudna has been awarded the 2014 Lurie Prize in the Biomedical Sciences from the Foundation for the National Institutes of Health.

Research by Assistant Professor of Cell and Developmental Biology Diana Bautista was featured in an article about itching in the New York Times.

Professor of Biochemistry, Biophysics and Structural Biology James Hurley is the recipient of the 2014 Hans Neurath Award awarded by the Protein Society. This award is given to an individual who has made "a recent contribution of unusual merit to basic research in the field of protein science."

It is with sadness that we announce the Professor Emeritus of Neurobiology Harold Lecar passed away on February 4, 2014.

Department Co-Chair and C.H. Li Distinguished Professor Professor of Genetics, Genomics and Development Richard Harland is the 2014 recipient of the Conklin medal from the Society of Developmental Biology.

Howard Hughes Investigator and Professor of Biochemistry, Biophysics and Structural Biology Carolyn Bertozzi has been elected to the rank of Fellow of the National Academy of Inventors (NAI) for 2013.

The City of El Cerrito, California, has declared December 10, 2013 as "Randy Schekman Day" in honor of Professor of Cell and Developmental Biology Randy Schekman, a town resident.

It is with regret that we announce that Professor Emeritus of Genetics, Genomics and Development James Fristrom passed away on October 29, 2013.

Professor of Biochemistry, Biophysics and Structural Biology Jeremy Thorner will be awarded a Lifetime Achievement Award by the Genetics Society of America (GSA) at their 2014 Yeast Genetics Meeting.

Professor of Genetics, Genomics and Development Jasper Rine has been elected as the 2014 Vice-President and 2015 President of the Genetics Society of America (GSA).

Howard Hughes Investigator and Professor of Cell and Developmental Biology Randy Schekman has been awarded the 2013 Nobel Prize in Physiology or Medicine for his work on the transport of vesicles within cells. The prize was awarded jointly with James E. Rothman and Thomas C. Südhof.

Professor Schekman received his award and gave his Nobel acceptance speech on December 10, 2013 in Stockholm, Sweden.

Assistant Professor of Neurobiology Hillel Adesnik and Assistant Professor of Biochemistry, Biophysics and Structural Biology David Savage or both recipients of 2013 NIH Director's New Innovator Awards. This award support investigators who are within 10 years of their terminal degree conduct exceptionally innovative research.

Bowes Research Fellow William Ludington is the recipient of an NIH 2013 Early Independence Award. These awards provide an opportunity for exceptional junior scientists to move immediately into independent research positions after receiving their Ph.D.

The Department of Molecular & Cell Biology is pleased to welcome six new junior faculty members for the 2013-14 Academic year. 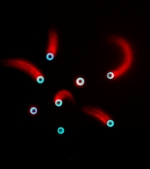