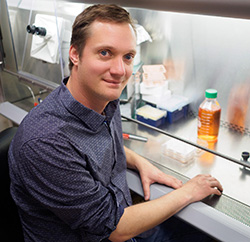 Our goal is to shed light on the key functions of telomeres and telomerase in tissue homeostasis, tumorigenesis and aging. Telomeres are the repetitive DNA sequences at the end of linear eukaryotic chromosomes that allow a cell to distinguish the natural chromosome end from aberrant DNA breaks. Telomeric DNA repeats can be generated de novo by the enzyme telomerase thereby providing a compensatory mechanism that counteracts terminal sequence loss caused by the end replication problem. 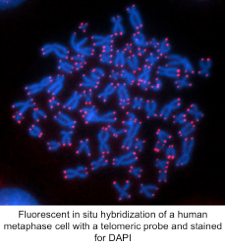 As a result, telomeres and telomerase are essential to genomic integrity and their disruption is associated with cancer and aging. The use of genetic mouse models has been a powerful way to gain insight into the fundamental mechanisms of how the telomere evades recognition by the DNA-damage machinery, the consequences of telomerase loss, and how the single stranded telomeric overhang is established. However, telomere shortening naturally occurs only in human somatic cells, but not in mouse cells. This telomere shortening, which functions as a tumor suppressor mechanism by limiting the replicative potential of human cells, is the result of selective silencing of telomerase expression in human cells upon their differentiation. Notably, this process is reversed and telomerase reactivated in about 90% of all human tumors after which telomerase expression becomes essential for their proliferation. 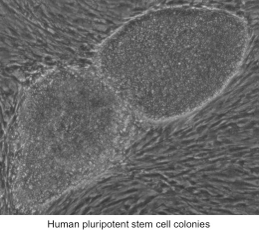 Human pluripotent stem cells (hPSC) are an ideal model system to study telomerase regulation, as they are telomerase-positive, but can be rapidly differentiated into telomerase-negative cells.  Moreover, the reverse process of telomerase reactivation can be studied during the process of reprogramming somatic cells into induced pluripotent stem cells (iPSCs).  Owing to their constitutive telomerase expression, PSCs are immortal and can be expanded indefinitely in culture.  However, in contrast to other model systems such as tumor cells, they have functional DNA surveillance and cell cycle checkpoints and therefore are ideal for studying the effects of telomere shortening and dysfunction on these pathways.

Over the last few years we have developed robust protocols to derive and genetically modify human PSCs.Prior to this, primary human cells were resilient to conventional homologous recombination making gene targeting extremely inefficient and time consuming.

Due to these technical advancements we can now overexpress or silence genes, correct disease-causing mutations, and engineer reporter genes in human PSCs. In my laboratory, we will use these gene targeting strategies to study the biology of human telomeres to address: