Giving Back: The Prison University Project 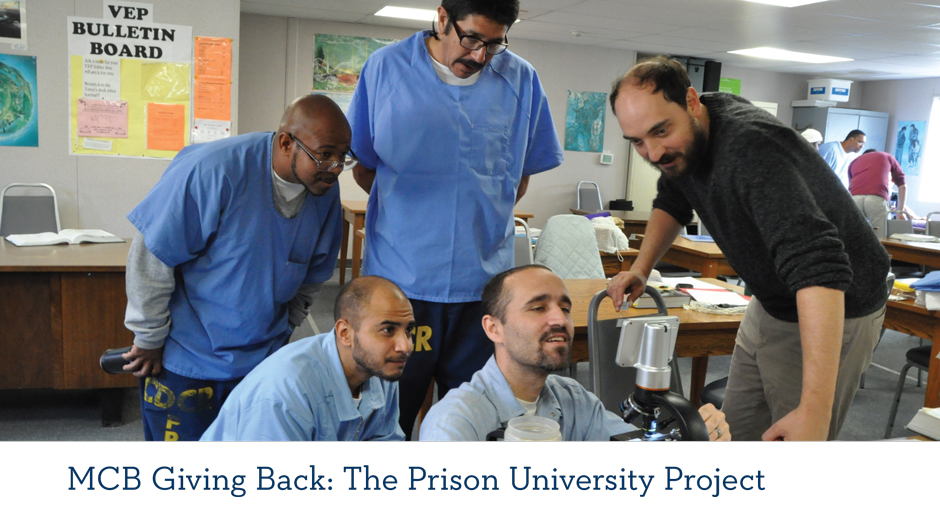 Berkeley’s reputation for academic rigor often extends to unexpected places. One of the most unexpected may be at San Quentin State Prison, which lies just across the San Francisco Bay. For the past five years, Emma Carroll, Shion Lim, Brock Roberts and Adam Williamson have worked with incarcerated students through the Prison University Project (PUP), which enables inmates to earn an Associate of Arts degree. Many PUP alumni have gone on to matriculate at other colleges and universities after their release from San Quentin.

Carroll, Lim, Roberts, and Williamson are just a few of the current and former MCB graduate students and postdocs who volunteer their time with PUP, teaching such classes as chemistry with lab, physics with lab, English, and math. Recently the group even collaborated with two neurobiologists — Moe Turner of Berkeley and Charlie Gross of Princeton — to develop a team-taught biology with lab course supported by the University of California, San Francisco Science Education Partnership.

A typical class period doesn’t differ much from one at Berkeley, says Williamson: lively lectures and discussions, pre-labs and lab report write-ups, and projects or presentations. Carlos is one of the program’s enthusiastic participants. “Biology with lab was by far the most exciting and thought-provoking class I’ve ever taken,” he recently wrote. “It’s hard to imagine how you guys got the approval to bring in microscopes and human organs!” He closed with the news that he hopes to pursue a science career upon his release, as he waits for final sign-off on his impending parole.

Launched in 1996, the Prison University Project is the only on-site, degree-granting college program in the entire California State prison system. It currently serves about 330 students, two-thirds of whom are enrolled in college-level courses. The recidivism rate for new offenses among PUP graduates who leave prison is just 4 percent, compared to 19 percent for all prisoners released statewide in the same timeframe. In 2015, the program received the 2015 National Humanities Medal.

Carroll joined PUP in order to share her passion for science and to give back to the community. She’s been impressed by her students’ enthusiasm and “how deeply they think about what they’re taught. They always show up at study hall prepared and with a list of questions about the homework. One student asked me if there were actually jobs in science.” On a personal level, Lim has enjoyed the way her experience has “opened up conversations about teaching, science, and the country’s prison system in unexpected ways. I’ve enjoyed sharing my experience in an educational environment that most of the public may not have any experience with.”

A little info on some of the MCB PUP mentors:

Read letters from the inmates involved:

Carlos shares his perspective, and an interesting paper he wrote early in his involvement in PUP.

Danny writes of his experience in the PUP program, and specifically his appreciation for Adam Williamson's biology class.

Eddie shares how biology has changed his perspective as an inmate.


Back to Main Spring 2017 Newsletter Page