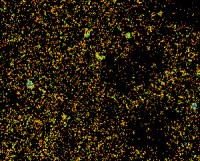 Their research found that Pol II, which is responsible for catalyzing the transcription of DNA into RNA, constantly dashes among "hubs" of proteins, rather than lingering at a particular gene as previous studies suggest. These discoveries suggest a new framework for disease management, involving novel drugs that may target gene regulatory interactions as a means of treatment.

This research also adds to the debate over whether phase separation occurs during gene activation and transcription in the nucleus.

MCB postdoc Shasha Chong and graduate student Alec Heckert are co-authors on the study as well.