On August 10, 2007, the campus community lost Robert (Bob) K. Mortimer, one of its kindest, most generous, members who is justly credited as being the father of his field. Bob’s pioneering work led to thousands of scientific careers dedicated to the study of that glorious microbe, the yeast Saccharomyces cerevisiae, responsible for such pleasures of life as beer, bread, wine. 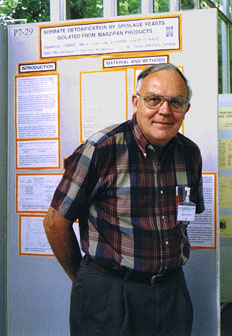 Prior to his time at Berkeley, Mortimer was a promising graduate of the University of Alberta with undergraduate honors in both Mathematics and Physics. With a surplus of talent and interest he considered pursing a career in oil and gas exploration in Alberta, which time has proven could have been an immensely successful decision. Fortunately for Berkeley, he chose to come here for his Ph.D., working with Cornelius Tobias as his advisor to study the impact of radiation on the survival of cells. Tobias had an idea that the more copies of each chromosome that a cell had, the more resistant it should be to the harmful impact of X-rays. In the tradition of the very best graduate students, Bob quickly showed that his advisor’s favorite idea was wrong. Using yeast cells, and the rudimentary genetic methods of the day, in the early 50’s Mortimer created strains of yeast with one, two, three or four copies of each chromosome. Tobias expected these genetically buffed strains to resist the damage of X-rays. Instead, Mortimer discovered that more chromosomes led paradoxically to greater X-ray sensitivity, which led to his now famous studies of the many processes that all cells have to protect them from various physical and chemical damages to their DNA. Indeed, the so called RAD genes that were discovered in these studies are the foundation of most contemporary studies of how higher cells repair damage to their DNA. During the course of these studies, he was advanced to a faculty position at Berkeley, where he remained for his entire career. For most of the time, his office and lab were in Donner Hall, where he kept his door open to all who shared his interests in yeast genetics.

Yeast chromosomes are tiny compared to the chromosomes of other related organisms and hence did not lend themselves well to the cytogenetic methods that dominated studies of Drosophila, Maize and Neurospora, other important organisms for genetic research in the 50’s and since. Mortimer realized that a genetic map of yeast would be required to figure out just what X-rays did to chromosomes that led to cell death, and set out to create such a genetic map. He reasoned that since fungi usually have only a handful of chromosomes, the creation of a genetic map would not take all that long. However, Saccharomyces yeast turned out to have 16 chromosomes, which made the construction of a genetic map to be much more challenging. By the mid 70’s, however, Mortimer had a workable map with multiple mutations marking all the chromosomes.

Even with a workable genetic map, Saccharomyces would have languished as an experimental organism except for another of Bob’s remarkable contributions, this time of an entirely technical nature. Unlike other fungi whose meiotic spores virtually explode out of the ascus to make their isolation and cultivation easy, the four spores from Saccharomyces’ meiosis are born in an ascus that seems to be armor plated. The microdissecting needles used to isolate one spore form others can seldom break an ascus, making the analyses of even a few Saccharomyces meioses exceedingly difficult, and only for those with nerves of steel and stubborn persistence. Mortimer reasoned that all forms of life are eaten by something and hence some creature must be able to digest Saccharomyces asci. With great ingenuity, he and his colleague Johnston in 1959 discovered that if they extracted the juice from the guts of snails, that juice could be used to digest the asci, liberating the spores for genetic analysis. Although inconvenient for the snails, this insight threw open the power of genetic studies using yeast. Rather than analyzing a few meioses, it was now possible for one person to analyze thousands of meioses, which Mortimer, his students and post-doctoral fellows have done.

The ability to analyze thousands of meioses led to the discovery and characterization of gene conversion in Saccharomyces. This process allows the information on one chromosome to be essentially copied into the homologous chromosome, replacing the information that was there. Mortimer and colleagues, including notably Seymour Fogel of the Genetics Department, produced the wealth of data on gene conversion that eventually led, along with work of many others, to the methods that now allow precise gene replacements to be done in many different organisms.

Yeast divide by budding, leading to populations of genetically identical cells. However in 1959 Mortimer and Johnston discovered in their now famous Nature paper that individual cells in a culture of yeast can have very different life spans, depending upon whether the cell is a mother cell or a bud. To our knowledge this was the first demonstration of mortality in any growing population of microbes. There is now a rapidly growing field studying the genetics of aging, and in recent discoveries that stagger the imagination, it is clear that Mortimer’s work on yeast aging set the stage for the discovery of the first genes affecting aging, and whose function is conserved from yeast to metazoans.

Mortimer played yet another huge role in developing the field of yeast genetics by creating the Saccharomyces stock center, which housed the many thousands of strains of yeast that his group created, and strains that they obtained from others that he thought would be of interest to the community. Any investigator could browse the catalog and request any strain and receive it promptly for nothing more than the cost of a stamp. This generous service did much to create a culture of sharing which still blesses the yeast genetic community to this day. Indeed, in 2002 Mortimer received the “George W. Beadle Award” from the Genetics Society of America in recognition of his many contributions that created the community of approximately 10,000 researchers who daily turn their attention to uncovering more of the secrets of Saccharomyces.

Following his official retirement from UC, Mortimer spent 10 years in affiliation with the University of Florence, where he researched the genetic properties of yeast strains used in wine production. It seems perfectly fitting that at some point in the future we will be able to drink a toast to Mortimer with wine that benefited from his insights into the biology of yeast.

Mortimer is survived by his wife Mary, sons Douglas and Bruce, daughter Barbara, and three grandchildren. In addition to his family and science, Mortimer’s other interests included fly fishing, mushroom hunting, hiking and gardening.