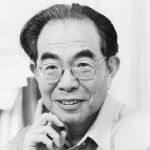 MCB Professor of the Graudate School Hiroshi Nikaido is the 2018 recipient of the American Society for Microbiology's Lifetime Achievement Award. This award honors scientists who have made sustained contributions to microbiological sciences, of which Nikaido has made many throughout his extensive career.

Nikaido's scientific contributions include his pioneering research on the structure and function of bacterial membranes, especially in gram-negative bacteria, and the role of selective permeability of the the outer membrane in antibiotic resistance.

Nikaido came to UC Berkeley as a faculty member in 1969. Before that, he was an Assistant Professor of bacteriology at Harvard Medical School. He received his MD and PhD from Keio University in Tokyo in 1961.