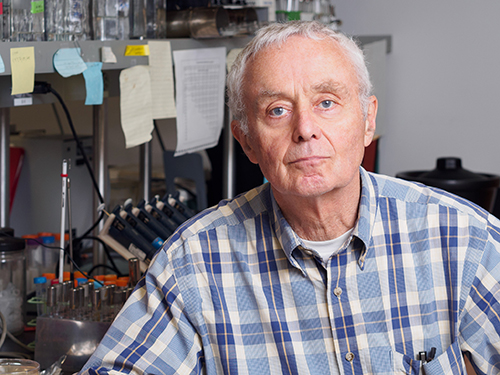 On behalf of the MCB community, it is with great sadness that we share the sorrowful news about the passing of our colleague Richard Lane Calendar, Ph.D., who was Professor of Molecular Biology (1968-1989) and, after our reorganization of the biological sciences, Professor of Biochemistry, Biophysics and Structural Biology (1989-2009), and, then, a Professor of the Graduate School (2009-2020), here at the University of California, Berkeley. Rich was an international leader in the study of bacterial viruses (bacteriophages) in Escherichia coli, Listeria monocytogenes, and Bacillus anthracis. He literally “wrote the book” on this subject—  The Bacteriophages, 2nd Edition, Oxford University Press, New York, NY, 2006. Earlier, he updated a textbook, originally written by another late colleague Gunther S. Stent (1924-2008), that was extremely influential and broadly used for many years— Molecular Genetics: An Introductory Narrative, 2nd Edition, W.H. Freeman & Company, New York, NY, 1978.

Rich was a dedicated researcher who relished working with his own hands throughout his career and continued to work at the bench until a month before his death.  His final paper, describing work carried out in collaboration with colleagues at the Lawrence Berkeley National Laboratory and colleagues on the UC Berkeley campus, was posted on PubMed on 13 October 2020 [High-throughput mapping of the phage resistance landscape in E. coli.  Mutalik VK, Adler BA, Rishi HS, Piya D, Zhong C, Koskella B, Kutter EM, Calendar R, Novichkov PS, Price MN, Deutschbauer AM, Arkin AP (2020) PLoS Biol. 8: e3000877].

Rich was exceptionally supportive of and dedicated to undergraduate education, and he continued teaching for many years after his formal retirement.  Shortly, after his arrival, he created the first course in Molecular Biology and helped establish a Molecular Biology major here at UC Berkeley. Most recently, he had been a regular instructor in MCB 102 (Survey of the Principles of Biochemistry and Molecular Biology), and, without complaint, taught any one of its three distinct segments, as needed, in any given year. Rich was an innovator long before that was a buzz word: to engage the students, he would give them songs to remember the facts more easily. In his research laboratory, Rich trained over a hundred undergraduates, many of whom have gone on to prominent academic careers, including geneticist Susan L. Forsburg (now at Univ. of Southern California) and Nobel Prize Laureate Andrew Z. Fire (now at Stanford Univ.).  Rich regularly provided fellow scientists with phages and critical insights into phage biology. He also brought laughter with his cartoons and stories. Multiple collaborators and colleagues have expressed their gratitude for Rich’s intelligence and expertise as well as his genial and magnanimous nature. Rich was also known by many for his annual winter Santa Lucia celebration where he played his guitar, sang Swedish songs, and provided ample refreshments for all, including his famous (and potent) version of the traditional quaff, known as glögg. Rich was a man who always enjoyed a good party!

In this time of loss, we as a community are brought to remember how fortunate we are to have benefited from Rich's research acumen, commitment to education, generous spirit, and good humor. We offer our sincerest condolences to Rich's family, scientific brood, and close friends.