MCB graduate student Hana Lee of Professor Rachel Brem’s lab was selected as one of the 2009 recipients of The Paul and Daisy Soros Fellowships for New Americans. The Paul & Daisy Soros Fellowships for New Americans are awarded to immigrants to the United States or children of immigrants, and are based on the candidate’s creativity, originality, and initiative; commitment to and capacity for accomplishment; and commitment to the values expressed in the US Constitution and the Bill of Rights. The third criterion includes activity in support of human rights and the rule of law, in opposition to unwarranted encroachment on personal liberty, and in advancing the responsibilities of citizenship in a free society.

The purpose of The Paul & Daisy Soros Fellowships for New Americans is to provide opportunities for continuing generations of able and accomplished New Americans to achieve leadership in their chosen fields. The Program is established in recognition of the contributions New Americans have made to American life and in gratitude for the opportunities the United States has afforded the donors and their family.

Paul and Daisy Soros, Hungarian immigrants and American philanthropists, established their fellowship program for New Americans in December 1997 with a charitable trust of fifty million dollars. Their reasons for doing so were several. They wished to"give back" to the country that had afforded them and their children such great opportunities and felt a fellowship program was an appropriate vehicle.They also felt that assisting young New Americans at a critical point in their education was an unmet need. Finally, they wished to signal to all Americans that the contributions of New Americans to the quality of life in this country have been manifold.

The deadline for applications for the next round of Paul & Daisy Soros Fellowships for New Americans is Saturday, November 1, 2009.  Qualified applicants may obtain information at the website at www.pdsoros.org. 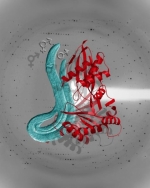 Ribbon diagram of the crystal structure of XOL-1, the primary determinant of sexual fate in C. elegans