Four years ago, a new weapon in the war on cancer made it to clinical trials accompanied by headlines and hope. Gleevec, a drug manufactured by Novartis, appeared to selectively turn off a specific cancer-causing protein like a light switch, stopping the progress of a severe form of leukemia in its tracks.

The odd thing is that nobody really knew how the drug knocked out the leukemia-causing cells while leaving healthy proteins alone. Just seven months before the FDA approved Gleevec in May 2001, Professor John Kuriyan announced that he had solved the puzzle.

"Our lab studies protein molecules that are produced by certain genes, normal or not," says Kuriyan, a professor of molecular and cell biology and chemistry at UC Berkeley. "By determining how the atoms are arranged in three dimensions, we try to figure out what goes wrong as a result of particular mutations. That can help drug companies learn how a compound might flip the switch one way or another."

At the time of his discovery, Kuriyan was head of the Laboratory of Molecular Biophysics at Rockefeller University and an investigator at the Howard Hughes Medical Institute (HHMI). Since arriving at Berkeley, Kuriyan has continued his cancer-related research with HHMI support. Most recently, he's helped determine why some patients develop a resistance to Gleevec. 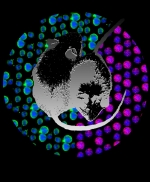