Howard Hughes Investigator and Professor of Biochemistry, Biophysics and Structural Biology Eva Nogales has received the 2015 Dorothy Crowfoot Hodgkin Award from The Protein Society. The award is granted in recognition of exceptional contributions in protein science which profoundly influence our understanding of biology.

"Dorothy Crowfoot Hodgkin was a founder of the science of protein crystallography as well as a Nobel laureate."

The 2015 awards will be presented at the 29th Annual Symposium of The Protein Society. 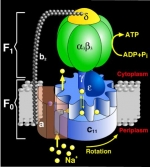 The structure of ATP synthase, the universal protein that manufactures ATP