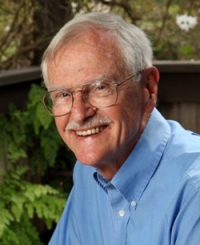 Professor Emeritus of Berkeley's Biochemistry Department (now a part of Molecular and Cell biology), Roger David Cole, passed away at age 91 in Santa Barbara on March 13, 2016. Cole worked at Berkeley from 1958 until 1992, when he retired as Assistant Dean in the College of Letters and Science. Cole was awarded the Berkeley Citation in 1992 for going "beyond the call of duty and whose achievements exceed the standards of excellence" in his field.

"Memorial Services will be held at Free Methodist Church, 1435 Cliff Dr. Santa Barbara, 93109 on April 2, 2016 at 2 pm. If you are so inclined, wear a little Cal blue and gold in honor of Dave's passion for his alma mater." (from his Obituary in the Santa Barbara News Press)