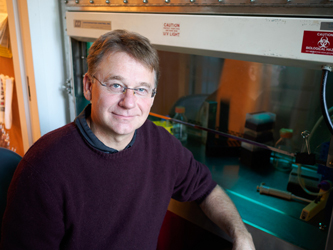 The Roelink lab is interested in the mechanisms of embryonic induction, the phenomenon in which a group of cells changes the developmental fate of neighboring cells via the release of inducers. The molecular nature of these inducers is known and they belong to a relatively small number of families of signaling molecules. Invariably these molecules are involved both in the maintenance or differentiation of adult stem cells as well as in cancer. We are particularly interested in those inducers that are critical for neural tube patterning; Sonic Hedgehog (Shh) and members of the BMP and Wnt families. We are using both neuralized Embryonic Stem (ES) cells as well as chicken embryos to assess the effects of inducers and the molecules involved in their distribution, reception and intracellular signal transduction. We apply this knowledge to instruct embryonic stem cells to differentiate in vitro into desired cell types.

The role of Disp1 in the distribution of Shh

Dispatched1 (Disp1) encodes a widely expressed twelve transmembrane domain protein with a putative sterol-sensing domain and is required for paracrine Sonic hedgehog (Shh) signaling. In the absence of Disp1 function, Shh is largely retained in Shh-producing cells, suggesting a role for Disp1 in the export of Shh and establishment of a long-range Shh gradient. The precise role of Disp1 in releasing lipid-modified Shh from Shh-expressing cells remains unclear, however, we envisage two possible Disp1 functions in Shh-expressing cells; the polarized trafficking of Shh or formation or release of soluble Shh complexes.

We derive neural tissues from ES cells, and take advantage of the many ES lines in existence with specific genetic defects, including those that do not have functional Disp1 genes. Using these cells we can both address the requirement for Disp1 in cells that express Shh, as well as in the cells that respond to Shh.

Since Shh has two membrane anchors, but nevertheless signal over a long range, it is no surprise that there are several molecules that bind Shh in the extracellular space and influence the range of Shh. We are investigating both the role of Heparan Sulfate Proteoglycans (HSPGs) and Hhip in Shh distribution. HSPGs are large molecules that occupy a significant fraction of the extracellular space, that bind many signaling molecules, including Shh. We are testing the ability of ES cells deficient for Ext1, which is required for Heparan Sulfate synthesis, to produce, release and respond to Shh.

Hhip is a transmembrane protein that binds Shh in attenuates the Shh response, presumably by preventing transport of Shh, or binding of Shh to its receptor. However, despite the presence of a transmembrane domain, Hhip is able to inhibit the Shh response several cell diameters away from where it is synthesized. This in turn implies that Hhip, despite the presence of a trans-membrane domain, is released from cells. We are very interested how Shh and Hhip, proteins expected to be membrane bound, still have effects several cell diameters away form their sites of synthesis.

Embryonic Stem cells have the capacity to make any cell type present in an organism, and as such are the most powerful source of cells to generate differentiated cells and tissues in vitro for transplantation purposes. During development, stem cells acquire their ultimate phenotype in response to inductive signals present in their immediate environment, and in principle, it is possible to create cell culture conditions that would result in widespread differentiation of the desired cell type. We are defining conditions to generate specific neuronal cell types in ES cell-derived neuralized Embryoid Bodies by using combinations of Shh, BMPs and Wnts as well as their antagonists.