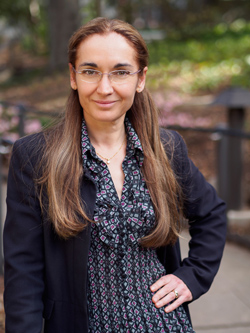 Our lab is dedicated to gaining mechanistic insight into crucial molecular processes in the life of the eukaryotic cell. Our two main research topics are the role of cytoskeletal dynamics in cell division, and the molecular mechanisms governing the flow of genetic information. The unifying principle in our work is the emphasis on studying macromolecular assemblies as whole units of molecular function via visualization of their functional states and regulatory interactions. We use electron microscopy (EM) and image analysis, biochemical and biophysical assays, towards a molecular understanding of our systems of interest. 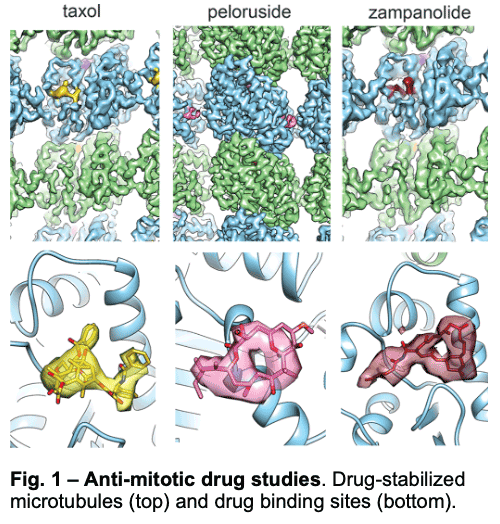 1.1 – Drug Binding and Effects
Microtubules are essential cytoskeletal polymers involved in a myriad of cellular functions that are regulated by numerous associated proteins and constitute a major target for cancer treatment. Our lab continues to break new ground on the characterization of their structure and regulatory interactions.
We have visualized drugs that stop mitosis through the stabilization of microtubules. We showed that while peloruside acts at lateral contacts and regularizes the microtubule lattice, Taxol and zampanolide affect the longitudinal interface between tubulin dimers and induce microtubule heterogeneity (Fig. 1). These findings suggested the use of combinations of microtubule-stabilizing agents to regulate microtubule activity and improve therapeutic potential.
1.2 – Regulation by Nucleotide and Associated Proteins
We are probing the distinct effects of nucleotide and microtubule-associated factors on the structure of the microtubule. For example:
We have described the interactions between the calponin homology domain of the +tip-tracking protein EB3 and the four tubulin subunits it contacts (Fig. 2, orange), and proposed that EB (End-Binding) proteins modulate structural transitions at the growing microtubule end by recognizing and promoting an intermediate state in the GTP hydrolysis cycle.

Transcriptional regulation of gene expression is critical for growth and survival. We study epigenetic gene silencing by PRC2 (Polycomb Repressive Complex 2) and transcription initiation by the Pol II system. The molecular machinery involved in the latter include a number of challenging multi-subunit complexes that are conformationally and biochemically complex, and only accessible in minute amounts due to their scarcity in the cell.
2.1 – PRC2 and Gene Silencing