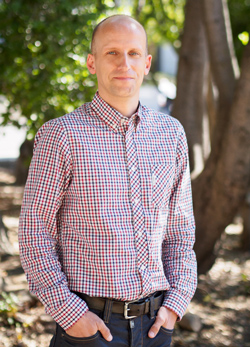 In all cells, the degradation of intracellular proteins is highly specific and tightly regulated by ATP-dependent compartmental proteases. These proteases belong to the AAA+ ATPase family, whose characteristic feature is a structurally conserved ATPase domain that assembles into oligomeric rings and converts the energy of ATP binding/hydrolysis into conformational changes to perform mechanical work. Molecular machines of this enzyme family are also active, for instance, as helicases, translocases, clamp loaders, or motor proteins. For protein degradation, the AAA+ ATPases collaborate with compartmental peptidases. In these complexes, the ATPases recognize appropriate protein substrates and harness ATP hydrolysis to drive the mechanical unfolding and the translocation of the polypeptide chain into a sequestered degradation chamber of the associated peptidase.

The research of my lab focuses on the 26S proteasome, the major ATP-dependent protease in eukaryotic cells. In addition to processing misfolded, damaged, and incompletely translated proteins, the proteasome selectively degrades a large variety of regulatory proteins that are involved in cell-cycle control, cell differentiation, signal transduction, transcription, and other vital processes, making it a very important mediator of post-translational control.

Most proteasomal substrates are marked for degradation by the attachment of a poly-ubiquitin chain, which acts as a tethering signal for substrate delivery. Although substantial knowledge about the ubiquitin-tagging systems has already been accumulated, the mechanisms underlying proteasomal substrate degradation, the irreversible and hence critical step for the unidirectional control of cellular pathways, remain largely elusive.

Our goals are to decipher the fundamental principles that govern substrate engagement, de-ubiquitylation, unfolding, and translocation by the proteasome.

ATP hydrolysis and substrate translocation
The 26S proteasome is composed of approximately 32 different subunits, forming the barrel-shaped 20S peptidase and the 19S regulatory particle. The 19S regulatory particle, also called the 19S cap, is an 18-subunit complex that functions in substrate recognition, processing, and as a gatekeeper for substrate entry to the 20S core. It consists of the lid and the base subcomplexes, the latter containing six distinct AAA+ ATPases that are probably arranged in a hexameric ring. Based on the homology with prokaryotic ATP-dependent unfoldases like ClpX, the base of the 19S cap is thought to mechanically unfold and translocate substrates in an ATP-hydrolysis dependent manner, but virtually nothing is known about the underlying molecular mechanisms. A major goal of our research is to elucidate how many of the AAA+ subunits in the 19S base hydrolyze ATP or participate in substrate translocation, and what mechanisms are involved in subunit communication and coordination of activities in the hetero-hexameric ATPase ring. Furthermore, as there are no crystal structures available for the 19S complex or its individual ATPase subunits, the structural elements that face the central processing pore and contact the substrate polypeptide have yet to be determined. Our studies on the mechanisms of unfolding and translocation may also reveal determinants important for substrate “degradability” and give insight into how the structure, stability, and sequence properties of a protein affect its selection for proteolysis and the kinetics of degradation.

We are currently using the 26S proteasome from Saccharomyces cerevisiae, but will subsequently extend our studies to the mammalian system in vitro and in vivo. Given the role of the proteasome in the pathogenesis of numerous human diseases, a detailed knowledge of the molecular mechanisms of substrate processing may also lead to new ways of proteasome inhibition and thus novel pharmaceuticals for the treatment of cancer and other diseases.

Mechano-chemical coupling
We do not yet understand how AAA+ unfoldases transduce the energy from ATP binding/hydrolysis into conformational changes for substrate translocation. Our current model based on previous biochemical studies with the unfoldase ClpX from E. coli suggests that loop movement in the ATPase propel substrate through the central processing pore. We will use different spectroscopic methods to analyze the arrangement of structural elements within the 19S cap and their conformational changes upon ATP binding and hydrolysis. Besides monitoring conformational changes within the unfoldase, these measurements will also help to follow the path of substrate molecules during initial binding, engagement, unfolding, and translocation.