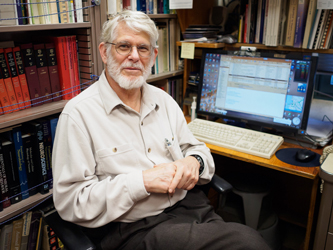 Professor of the Graduate School Division of Neurobiology

Synapses are not static; they are highly regulated. The strength of synaptic transmission can wax and wane after a bout of activity, and this shapes the information processing properties of neural circuits. I am fascinated by the mechanisms regulating synaptic transmission.

We use biophysical methods such as control of second messengers by photolysis of light sensitive caged compounds, measurement of second messengers with fluorescent dyes, tracking of vesicle movements with vital vesicle membrane labeling dyes, and computational modeling, as well as electrophysiological techniques, to study the mechanisms underlying regulation of synaptic transmission.

We study the roles of calcium in triggering transmitter release at fast synapses, and in modulating release following prior activity. Synapses are quite diverse: weak synapses transmit rarely to single action potentials and facilitate to repetitive stimulation, while strong synapses transmit effectively to single spikes and depress to a train. These differences arise from  different sensitivities to step rises in [Ca2+], imposed by photolysis of photolabile calcium chelators and measured fluorometrically from single presynaptic boutons. Theoretical modeling suggests that the different Ca2+ sensitivities  are due in turn to different states of Ca2+-dependent priming of vesicles in strong and weak synapses. Presynaptic Ca2+ not only triggers exocytosis, but also facilitates release after a single action potential, and enhances release after a train of action potentials (post-tetanic potentiation, PTP), by binding to different target molecules in presynaptic terminals. Presynaptic mitochondrial loading and Na+ accumulation also play roles in PTP: the post-tetanic extrusion of Ca2+ by Na+-Ca2+ exchange is reversed, prolonging the enhancement of transmitter release by the lingering residual Ca2+ leaking into cytoplasm from outside and from mitochondria. Computational simulations of calcium diffusion from channel mouths to docked vesicles and facilitatory effectors can account for the time course of transmitter release, accumulation of facilitation in a train, and measurements of presynaptic [Ca2+].

Serotonin is a neuromodulator of fast glutamatergic synapses, both in the mammalian brain and at arthropod neuromuscular junctions. We discovered that serotonin activates the production of cyclic AMP to open presynaptic hyperpolarization and cyclic nucleotide-activated (HCN) channels and activate exchange protein activated by cAMP (EPAC) at crayfish neuromuscular junctions. These targets operate in novel pathways to enhance secretion evoked by action potentials by an actin-dependent process.  Extension of the work to Drosophila junctions permits the application of modern molecular genetic techniques to the study of these pathways.  Planned projects include expression of fluorescent cAMP indicators in nerve terminals to track the spatio-temporal pattern of cAMP signalling, and genetic manipulations of EPAC and HCN channels in Drosophila to identify and characterize downstream targets.

SNARE proteins are involved in vesicle docking and fusion at nerve terminals, and undergo conformational changes, as well as cycles of assembly and disassembly, during exocytosis and endocytosis. We are using fluorescence resonance energy transfer (FRET) to detect these macromolecular rearrangements essential for neurosecretion.  We have detected signals that correspond to a tightening or reorganization of the SNARE complex on vesicle fusion, followed dispersion of SNARE proteins to the periphery of active zones, then disassembly of the SNARE complex prior to endocytosis, and finally the assembly of new SNARE complexes as new vesicles dock at the plasma membrane and become fully primed for release.