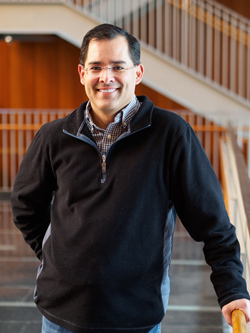 Professor of Neurobiology*
*And of Chemical and Biomolecular Engineering

Our research program melds biology and engineering principles to investigate stem cells and therapeutic gene delivery, i.e. cell replacement and gene replacement approaches to treat human disease. Stem cells, defined by their abilities to self-renew (divide in an immature state) and differentiate into specialized cells, play critical roles in organismal development and adult tissue function. Furthermore, because they are a renewable source of differentiated cells, these cells are being broadly explored for tissue regeneration. However, advances in this field will hinge upon gaining a deeper basic understanding of how stem cell function is regulated, and our group works with adult neural stem cells and human pluripotent stem cells to investigate this problem. In the area of gene therapy, the past few years have witnessed an increasing number of successful clinical trials, as well as several FDA approvals of gene therapies for cancer and rare disease, the latter of which is based on an adeno-associated viral (AAV) vehicle. However, the extension of these successes to most human diseases is impeded by a number of shortcomings of the viral vehicles used to carry therapeutic genes into cells, which are not surprising since nature never “intended” viruses to be used for human therapy. We have developed novel directed evolution approaches to optimize the efficacy of AAV, other viruses, and their genetic cargoes. These approaches are also yielding novel, basic insights into virus-host interactions, and have entered into human clinical trials. 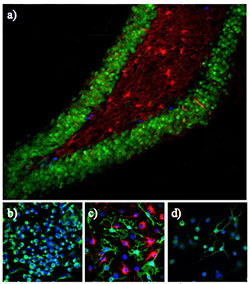 Adult neurogenesis, the generation of new neurons from stem cells in the adult brain, modulates learning and memory and can decrease during neurodegeneration. a) Neural stem cells undergoing proliferation in the hippocampus (BrdU, blue) of the adult brain can later undergo differentiation into granule neurons (NeuN, green) or astrocytes (GFAP, red). b) Stem cells can be cultured in an immature state (nestin, green; DAPI, blue. c) They can also undergo differentiation into astrocytes (GFAP, red) and (at least in vitro) oligodendrocytes (O4, green) upon addition of FBS, or d) into neurons (NF200, green) upon addition of forskolin and retinoic acid.

Spatiotemporal variation in cues that regulate of stem cell function – Stem cells reside within structurally complex tissue microenvironments or niches that present them with numerous control signals including soluble factors, extracellular matrix, and contact-dependent factors from neighboring cells.  For example, neural stem cells within the adult hippocampus are influenced by a repertoire of molecules representative of each of these classes, several of which our lab has discovered.  Importantly, it is becoming increasingly clear that it is not only the biochemical cues within the niche, but also the biophysical manner in which they are presented, that control cell function.  In particular, spatial and temporal variation of signals, modulation of tissue mechanical properties, and play critical roles in controlling stem cell function.  We have been developing novel experimental systems – both genetic and biomaterial – to investigate this problem.  In recent work, we have been applying novel optogenetic approaches to elucidate how temporal and spatial variation in input signals can impact neural stem cell fate decisions.  This work has revealed that not only the overall dosage but also the temporal manner in which these cues are presented impacts cell behavior, results whose underlying molecular mechanisms are being elucidated.

Biomaterials that control stem cell function – While natural tissues are three dimensional structures with complex biochemical and biophysical properties, cell culture systems typically involve a two dimensional, rock hard surface with liquid on top.  Considerable regulatory information, and in particular the “solid phase” structure of natural tissues, is clearly lost.  We have been applying advances in materials science and bioconjugate chemistry to create synthetic materials that can emulate solid phase properties of natural tissue and – employing an “analysis by synthesis” approach – enable investigations of their effects on stem cell function.  For example, in many situations when a ligand signal binds to a cellular receptor, oligomerization of receptor-ligand complexes plays a critical role in signal activation.  Using signaling molecules conjugated to polymers in controlled fashions, akin to beads on a string, we have shown that nanoscale organization in the presentation of numerous ligands (e.g. ephrins, Shh, FGF) results in 10-100 fold higher potency in inducing the proliferation or differentiation of neural stem cells and human embryonic and induced pluripotent stem cells.  We are now using these bioactive materials to investigate biophysical mechanisms by which receptor clustering can enhance, or in some cases is even required for, biological activity. 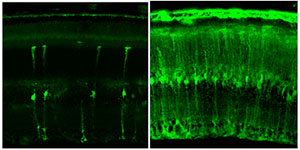 We have applied directed evolution to greatly improve adeno-associated viral (AAV) vector gene delivery to the retina, for the treatment of diseases that cause blindness. The left image shows delivery with the natural, parental virus, whereas our engineered variant (right) shows greatly enhanced delivery to many neuronal populations within the retina.

Engineering Targeted Gene Therapies – Delivering genetic material to a cell is a powerful means to control its function, for either basic investigations of key genes that regulate cell and organismal behavior or precision medicine endeavors to repair the function of diseased cells and tissues (i.e. gene therapy).  The critical limitation in this field, however, has been the development of safe and efficient vectors to deliver nucleic acids to target cells.  Over the past 15 years, we have been developing directed evolution as an approach to engineer novel viral vectors, resulting in successes that have entered into human clinical trials.  We are now applying analogous approaches to enhance the efficacy of genetic cargoes, including regulatory elements and targeted DNA nucleases.