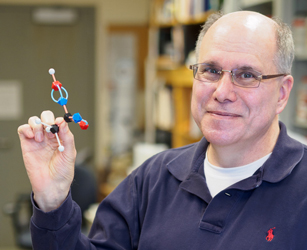 Our overall goal is to characterize the cell signaling pathways that inhibit the uncontrolled growth of epithelial-derived tumor cells, the cell type of most human cancers and develop preclinical strategies that can potentially be used to design new anti-cancer therapeutics.  Molecular, biochemical, cell biological and physiological experimental strategies are being utilized to explore the mechanisms by which extracellular signals (such as steroid hormones, growth factors and certain dietary and nondietary phytochemicals) coordinately regulate the proliferation, apoptosis, cell migration and cell-cell interactions of human cancer cells.  We employ several distinct human cancer cell model systems that include hormone sensitive and insensitive breast cancer cells, prostate cancer cells, endometrial cancer cells, and human melanoma cells.  In addition, we have been involved in a clinical collaboration, and we have recently established that certain human mammary epithelial cancer cells can be converted into a phenotype with stem cell-like properties that becomes highly sensitive to the apoptotic effects of dietary indoles. The breadth of the cancer research strategies in the Firestone lab spans the range from “promoter bashing” and intracelluar signaling to physiological approaches with animal tumor models and human clinical studies.

One major focus of our research is to investigate the anti-proliferative effects of phytochemicals in human reproductive cancer cells and human melanoma cells.  We have uncovered the critical cellular pathways that are regulated by indole-3-carbinol (I3C), a compound produced in cruciferous Brassica plants such as broccoli, cabbage and Brussels sprouts, and its natural dimerization product 3,3'-diindolylmethane (DIM) that suppress the proliferation, induce apoptosis and disrupts steroid hormone and growth factor responsiveness of human cancer cells.  Our studies have established the first molecular understanding of how these compounds target specific cell cycle components, the estrogen receptor, and the p53 tumor suppressor protein through the control of gene transcription, cell signaling components, and functional protein complexes. In addition, we have identified the enzyme elastase as the first I3C-specific target protein and that the I3C inhibition of elastase enzymatic activity disrupts cyclin E processing and CD40 processing, which together directly accounts for the loss of cell cycle control and disruption of NFkB cell survival responses. We have recently developed in silico computational modeling strategies to uncover predicted I3C interactions with elastase and have used this approach to predict new classes of I3C target proteins and to synthesize new I3C-related compounds with significantly enhanced efficacy for anti-cancer properties. We have also used human mammary preneoplastic epithelial cells to develop a novel cell line with a human breast cancer stem cell-like phenotype that we are using to understand how tumor stem cells can be controlled through I3C and its more potent derivatives.  We have collaborated with clinicians and the Bjeldanes' laboratory (Dept. Nutritional Sciences and Toxicology) to complete the first clinical study in Marin County, CA of the I3C dimer DIM, to show that DIM alters urinary steroid metabolites of postmenopausal women diagnosed with early stage breast cancer.  For more information about DIM, please see the Diindolylmethane (DIM) Information Resource Center at http://www.diindolylmethane.org/ or the Diindolylmethane (DIM) Immune Activation Data Center found at http://www.activamune.com/diindolylmethane_dim_immune_activation_data_center.htm

We have recently been investigating the anti-cancer properties and signaling pathways of other natural compounds such as the natural anti-malaria drug artemisinin, which is found in the sweet wormwood plant.  Artemisinin induces a cell cycle arrest of both early stage and late stage human breast cancer cells and human prostate cancer cells through distinct mechanisms. We have established that artemisinin regulates the expression and/or activity of specific sets of transcription factors that selectively target cell cycle components, as well as hormone receptors and their down stream signal transduction molecules.  We are currently focusing on identifying the target proteins the mediate the anti-proliferative signaling by artemisinin and assessing the synergistic anti-proliferative effects of combinations of artemisinin and other anti-cancer phytochemicals on human reproductive cancer cells both in cellular and in vivo contexts.

In a complementary area of research, we have uncovered the first direct mechanistic connection between glucocorticoid receptor action and tight junction formation (and induction of cell polarity) under conditions in which mammary epithelial tumor cells undergo a stringent cell cycle arrest.  In a multistep process, glucocorticoids were found to stimulate the recruitment of the tight and adherens junction proteins as well as key cell signaling molecules to the sites of cell-cell contact, which is followed by a distinct step that mediates tight junction sealing, and subsequent formation of a polarized cell monolayer.  Key transcription events in this cascade include the glucocorticoid stimulated expression of the helix-loop-helix transcriptional regulatory molecule Id-1 and its beta-catenin target protein, as well as the stimulated expression of the serum- and glucocorticoid-inducible protein kinase, Sgk, which is an important cell signaling component that we originally discovered. An important extension of this work has been to show that glucocorticoids regulate junctional complex organization in human endometrial cancer cells through a mechanism by requires the activation of cancer cell growth factor receptor signaling pathways.  We plan to continue to functionally define the steroid regulated components in the glucocorticoid induced cascades that control junctional organization in order to dissect the signaling pathways that mediate cell-cell interactions and to test their potential roles in epithelial cell tumorigenesis.