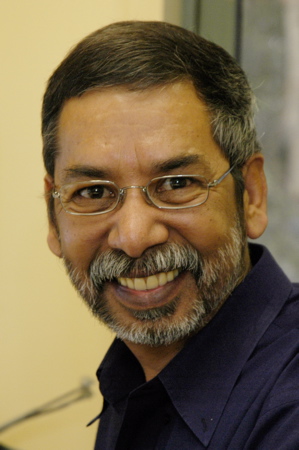 Our community sadly lost a pillar on Friday, January 22, 2021, when Nilabh Shastri, PhD, passed away. Nilabh grew up in a small town in India at the foothills of the Himalayas and, in 1980, obtained his PhD in Biochemistry from the All India Institute of Medical Science in New Delhi. He came to the US in 1981 to join Eli Sercarz's lab at UCLA and then Leroy Hood's laboratory at CalTech, where he began his life-long interest in understanding the human and mouse immune response. He was prolific as a postdoctoral fellow and co-authored 14 papers! In 1987, he came to UC Berkeley to set up his own lab (in the Department of Molecular & Cell Biology) and rose through the ranks to full Professor. Nilabh was a cornerstone of the immunology community at Berkeley and served as Division Head from 2010 - 2015. He also served on the University Budget and Interdepartmental Relations Committee, one of the most important and time-consuming positions a faculty member can hold in Berkeley's tradition of shared governance.

His most prominent scientific work addressed how T cells, a major component of the immune system, recognize foreign entities like viruses or cancer cells. T cells recognize proteins (antigens) that initially reside inside our cells and then are displayed on the outside of the cells. It was known that the foreign proteins were first broken down to small fragments (peptides), a few of which lodged in a cleft in another" presenting" molecule, called MHC, but identifying the actual peptide sequence was notoriously difficult. Nilabh developed an elegant method of identifying the specific peptide sequence for any antigen. He and others identified numerous important T cell antigens using this method. In so doing, he eventually made a startling discovery: that numerous important antigens were not derived from the known proteins of a virus or cell but instead were derived from rare non-canonical products of the protein translation system, called cryptic antigens. Though exceedingly rare in the cell, such products were suitable for T cell recognition, greatly expanding the universe of known antigens. In another major breakthrough, Nilabh explored the mechanisms that generate the peptides from longer proteins. It was known that larger proteins were broken down to fragments in the cytosol of cells, but not how the exactly tailored small peptides that bind in the cleft of MHC were finally generated. He identified the novel enzyme that trims one end of the peptide until it reaches the exact size required to slot into the MHC cleft. Without this enzyme, cells were unable to generate the correct peptides and exhibited defects in antigen presentation. Finally, Nilabh’s findings led to the discovery that in circumstances where antigen presentation is altered, as can occur in certain infected cells, specialized T cells can take up the slack by recognizing cells with these alterations. Nilabh was revered for making these fundamental discoveries and the elegant approaches and experimentation he used to make them. In recognition of his important research and distinguished service to the community, he was honored as a Distinguished Fellow of the American Association of Immunologists.

Nilabh was also a gifted and dedicated teacher, receiving the prestigious UC Berkeley Distinguished Teaching Award in 2000. His signature class was MCB150: Molecular Immunology. Although the class had >100 students, Nilabh made a point of getting to know every student by studying the class roster photos and meeting with the students individually and in small groups outside of the lecture. His lecture style was highly engaging: using clear, immediate examples from real life to convey the immune system's complexities and often including a generous dash of humor. In accepting the UC Berkeley outstanding teaching award, Nilabh spoke about his aspiration to be a guru to his students, adding that: "A guru is one of the most revered individuals in society in the Indian tradition — a personal instructor, but one who was historically reserved only for royalty. I believe students at Berkeley deserve no less."

Nilabh also aspired to be a guru for the young scientists who trained in his research laboratory. He trained a large number of grad students, postdocs, and undergrads, many of whom now hold leadership positions in academia and industry. He was beloved by his mentees, who appreciated his deep scientific knowledge, and well as his kindness and generosity. He led a diverse lab, including many women and persons of color, and he fostered an inclusive work environment, where everyone had a seat at the table. He also kept in close touch with his trainees after they left his lab and remained committed to fostering their scientific development throughout their careers.

After more than 30 years as a professor at Berkeley, Nilabh moved his lab to Baltimore in 2018, becoming a Bloomberg Distinguished Professor in the Department of Pathology at the Johns Hopkins School of Medicine. Despite the distance, Nilabh retained close contacts with Berkeley through his ongoing collaborations with Berkeley labs and his co-mentorship of UC Berkeley grad students.

Nilabh was beloved among the broader immunology community, where he was famous for digging into an area many thought largely solved, only to discover new and important aspects of the problem. He co-founded the International Workshops on Antigen Presentation meeting and regularly attended the Midwinter Conference of Immunologists in Asilomar, serving two terms as Councilor and co-organizing the meeting in 2007. Nilabh was also dedicated to serving the American Association of Immunologists. A member of AAI since 1994, Nilabh taught in the AAI Basic and Advanced Immunology courses for many years and served a term on the Awards Committee. Above all else, though, Nilabh will be remembered by immunologists everywhere for his kind spirit and generous nature.

Outside of science, Nilabh loved to cook and travel and visited many places around the world with his wife. He was known to gift colleagues and students with homemade jams and high-quality teas. He was physically fit, biking to work every day from his home, 7 miles from campus. Attesting to his stamina was a remarkable hike around a 32-mile path at 18,000 ft elevation in Mount Kailash, a Hindu sacred mountain in Tibet. Nilabh is survived by his wife of 40+ years, Amita, who is a Professor of Political Science at San Francisco State University, his daughter Avantika, son-in-law Lawrence and two grandsons.