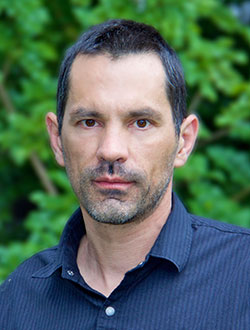 Evasion of host immune response recognition plays a key role in the establishment of systemic viral infection. Many viruses have evolved complex strategies for this evasion (one example being the down-regulation of cell surface MHC-I). Such strategies are readily observable among the herpesviruses, a family of large DNA viruses that efficiently produce persistent infections and disease in their host.

Our laboratory focuses its energy to understand the molecular mechanisms of immune evasion employed by this family of viruses. This will improve our understanding of viral pathogenesis and provide insights into basic cellular and immunological processes. Additionally, this could lead to new-antiviral strategies and the ability to exploit viral function as a tool with medical relevance.

MHC-I downregulation by KSHV. Kaposi's Sarcoma associated Herpesvirus (KSHV) encodes two transmembrane proteins (MIR1 and MIR2) that downregulate cell surface molecules (MHC-I, B7.2, and ICAM-1) which are involved in the immune recognition of infected cells. The pathway of this downregulation is novel: the target proteins are efficiently synthesized, matured and reach the cell surface normally. From that locale, however, they are rapidly and efficiently endocytosed and subsequently degraded in the endolysosomal compartment. We found that expression of MIR1 and MIR2 leads to ubiquitination of the cytosolic tail of their target proteins and that this ubiquitination is essential for their removal from the cell surface. MIR proteins thus define a novel class of membrane-bound E3 ubiquitin ligases that modulate the trafficking of host cell membrane proteins. We are now pursuing the characterization of the molecular mechanism of MIR-mediated downregulation.
KSHV establishment of latency. Like all other herpesviruses, KSHV undergoes two alternative gene expression programs throughout its lifecycle: latency and lytic replication. During latency, a small subset of viral genes is expressed to ultimately allow for the viral genome to persist in host nuclei as episomes. Importantly, KSHV latency is observed in the malignant cells isolated from Kaposi's sarcoma and primary effusion lymphoma, two pathologies associated with KSHV infections. We are identifying the cellular pathways and epigenetic events controlling viral episome generation and maintenance during latency.
Infection of a target cell by KSHV. Under the right conditions, latent KSHV virus can reactivate.  During this phase, the infected cell is hijacked to mass-produce viruses that are released into the extracellular space, enabling rapid spread to cells at a distance from the initial infection. In addition to this mode of infection, KSHV can also infect its target cells through direct physical contact with an infected cell actively replicating the virus. We are identifying the cellular and viral requirement for initiation of this contact-dependent infection route, which is important for host colonization by herpesviruses.
Induction of NKG2D ligands in infected cells. Natural Killer cells are a crucial part of the innate immune system. They recognize their targets in part through the presence of activating ligands. These ligands are absent on healthy cells but present on cells experiencing stresses such as infection or transformation. The best-studied class of activating ligands binds to the NK receptor NKG2D. As NKG2D ligands are highly expressed on infected and transformed cells this system allows NK cells to directly recognize and eliminate virally infected and transformed cells. While it is well known that viral infection induces the expression of NKG2D ligands the mechanisms for this induction are not well studied. In collaboration with the Raulet lab we are identifying novel mechanisms of innate sensing driving ligand induction.