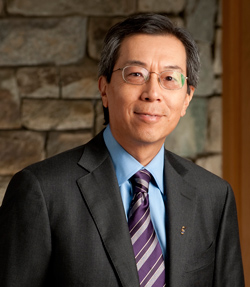 Howard Hughes Medical Institute President and Professor of Biochemistry, Biophysics and Structural Biology*
*And Affiliate, Division of Genetics and Development

Biochemistry of Transcription and Chromatin Transactions: Over the past 20 years, our lab has identified, isolated and characterized a large number (~100) of essential drosophila and human transcription factors. These regulatory proteins include enhancer/promoter recognition factors, core RNA pol II initiation factors and co-activators that form large multi-subunit complexes at promoter DNA to mediate transcription initiation and decode the genome. Our studies indicate that large co-activator complexes play a critical role in mediating both universal as well as cell type specific networks of gene transcription and can serve as the interface between transcription and chromatin regulation. Although our earlier studies focused on in vitro biochemistry and conventional molecular genetics approaches, our recent research is directed at the more challenging task of integrating specific molecular transactions with in vivo mechanisms in cells and organisms under physiological conditions.

Single Cell Biochemistry, Structural Biology and Single Molecule Measurements: In order to address mechanisms of transcriptional control we use a combination of structural biological methods such as cryo EM/3D particle reconstruction, X-ray crystallography and single molecule measurements. Another effort is to develop strategies for measuring the assembly and movement of transcription complexes at the single cell level. These studies aim to track the movement and function of target transcription factors in live cells by various optical methods. In addition, we continue to utilize tools such as siRNA mediated knockdown of transcription factors, mouse knockouts and talen based knock-ins as well as in vitro reconstitution of regulated transcription to link specific molecular mechanisms of control with in vivo physiology.

Transcription Mechanisms in Stem Cell Pluripotency and Differentiation: Deciphering the molecular basis of pluripotency is fundamental to our understanding of development and embryonic stem (ES) cell function. Using techniques such as ChIP-sequence analysis, systematic RNAi mutagenesis, transgenic animals or cells, and in vitro transcription assays, we have developed complimentary experimental strategies to dissect in vivo mechanisms of transcriptional regulation and tease out how these various protein/DNA and protein/protein transactions influence gene expression. We recently found that TAF3, a TBP-associated core promoter factor, is highly enriched in ES cells, where it is required for endoderm lineage differentiation and prevents premature specification of neuroectoderm and mesoderm. In addition to its role in the core promoter recognition complex TFIID, genome-wide binding studies reveal that TAF3 localizes to chromosomal regions bound by CTCF and cohesin. Enrichment for TAF3/CTCF/cohesin bound regions distinguishes TAF3-activated from TAF3-repressed genes. Notably, CTCF directly interacts with and recruits TAF3 to promoter distal sites and TAF3-dependent DNA looping is observed between the promoter distal sites and core promoters occupied by TAF3/CTCF/cohesin. Our findings thus support a new role of TAF3 in mediating long-range chromatin regulatory interactions to safeguard the finely balanced transcriptional programs that give rise to pluripotency.

In a related set of experiments, we have studied how the transcriptional activators Oct4, Sox2 and Nanog cooperate with a wide array of cofactors to orchestrate an ES cell-specific gene expression program that forms the molecular basis of pluripotency. We have used an unbiased in vitro transcription-biochemical complementation assay to discover a multi-subunit stem cell coactivator complex (SCC) that is selectively required for the synergistic activation of the Nanog gene by Oct4 and Sox2. Purification, identification and reconstitution of SCC revealed this coactivator to be the trimeric XPC-nucleotide excision repair complex. SCC interacts directly with Oct4 and Sox2 and is recruited to the Nanog and Oct4 promoters as well as a majority of genomic regions that are occupied by Oct4 and Sox2. Depletion of SCC/XPC compromised both pluripotency in ES cells and somatic cell reprogramming of fibroblasts to induced pluripotent stem cells, illustrating its diversified functions in maintaining ES cell pluripotency and safeguarding genome integrity.