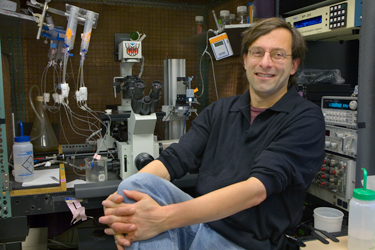 Work in the lab is focused in four intersecting areas: a) Mechanisms of ion channel function, b) Synapse development and plasticity, c) Neural circuit function, and d) Design of novel probes for the optical detection and manipulation of neuronal signaling. The projects all involve optical spectroscopy, imaging and electrophysiology.

A) Allosteric control of channel and enzyme gates. Ion channels respond to physiological signals by opening and closing molecular gates that control the flow of ions across the membrane. Our goal is to understand the general principles of operation of voltage and ligand-gated channels. Our approach combines electrophysiology with biochemical probing and spectroscopy to detect conformational changes in the moving parts of the channels during identified functional transitions, and to apply force to those moving parts in order to understand the mechanical coupling of sensor domains to gates or one sensor domain to another, and thus to investigate the mechanism of allosteric control of gating. At the heart of the effort are two methods, which we developed. The first is Voltage Clamp Fluorometry (VCF) (Mannuzzu et al., Science  271, 213-16, 1996; Glauner et al., Nature  402, 813-17, 1999). In VCF channel proteins are labeled site-specifically with fluorescent dyes and the structural rearrangements of the labeled segment of the channel are detected, in real-time, as changes in the fluorescence of environmentally-sensitive probes or FRET between donor-acceptor pairs. This is done in a native cellular environment under voltage clamp, at the ensemble and single molecule level, enabling specific protein motions to be associated with particular functional transitions. We are using the approach to study how protein motions in sensing domains that detect voltage or neurotransmitter ligands allosterically control the gates of channels or the activity of the catalytic site of a voltage-gated lipid phosphatase. The second method is single molecule TIRFM imaging in live cell membranes of single protein complexes in which subunits are fused to fluorescent proteins and their number is determined by counting steps of photobleaching (Ulbrich and Isacoff, Nature  Methods 4, 319-21, 2007). This is being used to determine the subunit composition of channels and receptors and their interaction with regulatory proteins.

B) Synaptic function and plasticity. Activity-dependent and independent mechanisms regulate synaptic size and strength to ensure a balance between excitation and inhibition of inputs and between input and output. This appears to be accomplished by integrated postsynaptic adjustment of synaptic receptors and retrograde signaling back to the presynaptic cell to adjust neurotransmitter release. The molecular mechanisms underlying these processes are not known. We are studying these processes in dissociated mouse brain neurons and brain slice, at the model glutamatergic synapse of the Drosophila neuromuscular junction and in zebrafish in vivo. We are using two tools developed in the lab. The first is a postsynaptic targeted calcium sensor, which exclusively detects calcium influx through postsynaptic glutamate receptors thereby making it possible to image synaptic transmission at quantal resolution, enabling us to determine precisely the release properties of single active zones and define their mechanism of plasticity (Peled and Isacoff, 2011). The second method involves optical manipulation of chemically engineered glutamate receptors (D, below) to determine the activity dependence of the retrograde transmission.

C) Neural circuit function in zebrafish. We are studying the development of function of neural circuits in zebrafish. The work combines remote control of action potential firing and synaptic signaling combined with imaging of activity with genetically encoded calcium and voltage sensors and electrophysiology. Our emphasis so far has been to identify spinal neurons that regulate the central pattern generator for swimming (Wyart et al., 2009), the development of the swim circuit (Warp et al., 2012), and the visual detection of prey (Del Bene et al., 2010).

D) Novel probes for the optical detection and manipulation of neuronal signaling. Fluorescent indicator dyes have revolutionized our understanding of cellular signaling. Chemical indicators have been very powerful, but are limited in scope because they cannot be targeted to specific cell types or locations within a cell. Our solution for this problem has been to make sensors from proteins--the very biological molecules that transduce, transmit and receive cellular signals. This includes genetically encoded optical sensors of membrane potential and of synaptic transmission and new tools for the optical manipulation of neuronal activity. The ability to artificially stimulate and inhibit neurons is important for investigating how they contribute to the function of neural circuits. Our goal is to develop new ways to regulate neuronal activity by creating ion channels that are regulated by light. Because light can be applied rapidly and accurately, this approach offers great promise even for neurons that communicate using sparse temporal codes. The functional switch consists of a tethered ligand containing a photo-isomerizable prosthetic group. Different wavelengths of light either increase or decrease the length of the tether, thus regulating the probability that the ligand will reach its binding site. Several strategies make it possible to change the sign of light-activated neural response (i.e. inhibition vs. excitation) and the location within the cell where the current is induced. We have already made K+ channels and ionotropic glutamate receptors that are gated by light (Banghart et al., 2004; Volgraf et al., 2006; Gorostiza et al., 2007; Numano et al., 2009) and shown that these can be used to study the circuits underlying behavior of flies (unpublished) and zebrafish (Szobota et al., 2007; Wyart et al., 2009; Janovjak et al., 2010). Along with the labs of John Flannery and Rich Kramer, we have begun to introduce these light-gated channels to surviving neuronal layers in retinas of mouse models of human blinding diseases in which photoreceptor cells degenerate in effort to restore vision (Caporale et al., 2011). We are now expanding the toolset to other channels, GPCRs and enzymes involved in synaptic plasticity.