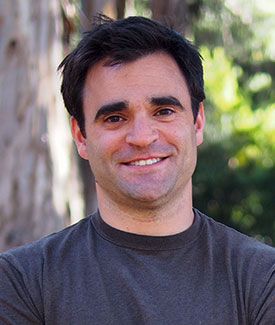 Our brain is responsible for all our perceptions, thoughts and actions. Despite the incredible array of processes the brain performs - from memory to emotion - its elementary units of function are the nerve cell and the synaptic junction. How is it that a collection of neurons and their synapses gives rise to all of animal and human behavior?

In mammals and especially in humans, the cerebral cortex is an area of the brain that is crucially involved in nearly all cognitive functions. Individual neurons in the cortex can make over 10,000 connections with other brain cells. The precise pattern of connections between a local group of neurons in the cortex gives rises to its elementary unit of computation - the cortical microcircuit.

The goal of our laboratory is to reveal the neural basis of perception. More specifically, we want to understand exactly how cortical microcircuits process sensory information to drive behavior. While decades of research have carefully outlined how individual neurons extract specific features from the sensory environment, the cellular and synaptic mechanisms that permit ensembles of cortical neurons to actually process sensory information and generate perceptions are largely unknown.

Addressing this fundamental question of modern neuroscience requires working at both the cellular and system-wide level to assess how populations of neurons cooperate to encode information, generate perceptions, and execute behavioral decisions. Towards this end, we monitor and and then manipulate specific subsets of genetically identified neurons in awake behaving mice to quantitatively determine their contribution to sensory processing and behavior. By turning neurons 'on' and 'off' using optogenetic and pharmacogenetic approaches, we can identify groups of cortical neurons that are both necessary and sufficient for specific neural computations. By complementing our in vivo work with detailed analysis of synaptic connectivity and network dynamics in vitro, we hope to arrive at a more complete understanding for how neural circuits in our brain support sensation, cognition, and action. Our lab is also developing a suite of novel optical and genetic approaches to manipulate neural circuits in the intact brain and at far greater resolution than is possible with current techniques. These new tecniques will allow us to address fundamental questions about sensory computation and perception that have as yet eluded investigation.

There are three major aims of our research. Our first goal is to understand the role of horizontal and vertical connections across each of the six major cortical layers in computing the size, shape, and texture of sensory objects. Horizontal connections that connect cortical columns are likely to play a critical role in these processes by providing a context for sensory stimuli in space. We take advantage of the mouse 'barrel' cortex in which each cortical column represents one whisker on the face. Using multi-electrode array recordings, two photon imaging, and in vivo whole cell voltage clamp recordings in the barrel cortex of awake, actively whisking mice we are dissecting the cortical circuits responsible for encoding and decoding tactile stimuli.

The second goal of the lab is to develop new high-speed and spatially precise optical approaches to manipulate neural activity at the level of single neurons in the intact brains of awake, behaving animals to decipher the neural code that underlies sensory perception. By combining non-linear optics with optogenetics we aim to control the activity of hundreds to thousands of neurons at single cell resolution, providing the key tool to understand how patterns of action potentials in space and time represent the external world.

Our third goal is to understand how global activity across mutliple sensory, motor and associational cortical areas, synthesizes specfic perceptions and selects the appropriate behavioral response to a given set of environmental conditions. We combine whole brain imaging approaches with targeted electrophysiology to reveal how communication within and across cortical areas cooperate to generate specific percepts.

Our hope is that by understanding how the brain generates perceptions at the level of synapses and circuits we will not only come to a much deeper appreciation for the biological mechanisms underlying brain function, but also reveal new avenues to treat neurological disease such as autism, schizophrenia, epilepsy, and movement disorders.