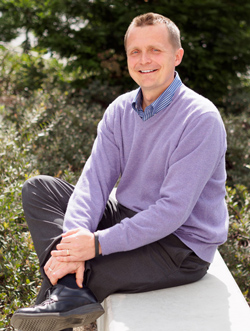 Our laboratory is interested in understanding the molecular mechanisms of cell fate decisions during metazoan development. While our early work focused on deciphering principles of regulated cell cycle transitions, we have recently begun to dissect signaling pathways that direct the differentiation of human embryonic stem cells. In our studies, we are paying particular attention to the function of a posttranslational modification, ubiquitylation, that is essential for human development and whose misregulation causes a wide range of devastating diseases. In particular, we identify ubiquitylation enzymes and their substrates that govern cell fate decisions; determine molecular mechanisms by which ubiquitin drives cell fate decisions; and develop novel therapeutic strategies to modulate pathological cell fate decisions, with an emphasis on cancer or pediatric diseases.

Who's making the decisions?

We have built state-of-the-art genetic discovery platforms to identify ubiquitylation enzymes that drive critical cell fate decisions. Our screening strategies range from straightforward siRNA approaches to ultracomplex shRNA-, CRISPRi- and CRISPRa-screens that exploit our own ubiquitin-focused shRNA or sgRNA libraries. Recently, this work allowed us to identify the cellular machinery controlling COPII vesicle size (Jin et al., Nature 2012) or to discover enzymes driving a hitherto unrecognized developmental switch that is essential for human neural crest cell specification (Werner et al., in revision). Older examples of this aspect of our work include the identification of the first ubiquitin-dependent chaperone, the CDC48/p97 segregase (Rape et al., Cell 2001), the catalytic center of the human anaphase-promoting complex, the ubiquitin chain elongating E2 Ube2S (Williamson et al., 2009), or a ubiquitylation module that promotes assembly of spliceosomes (Song et al., Genes Dev. 2010). Our current work in this area is focused on identifying new enzymes that drive various metazoan cell fate decisions, including in the nervous system and during myogenesis.

What's the basis for your decision?

To understand molecular mechanisms of ubiquitin-dependent cell fate decisions, we are isolating the critical substrates of newly identified ubiquitylation enzymes. We have developed a series of approaches that combine CompPASS mass spectrometry with mutants of ubiquitylation enzymes that are either defective in substrate binding or act as substrate traps. Coupled to focused shRNA screens, this often allows us to rapidly isolate critical substrates that can explain the function of a given ubiquitylation enzyme in governing an important cell fate decision. Aside from the examples mentioned above, our recent work revealed a series of mitotic ubiquitylation substrates that control assembly of mitotic spindles for accurate cell division (Song et al., Mol Cell 2014; Song et al., Mol Cell 2011).

Ubiquitylation comes in multiple flavors, ranging from a simple monoubiquitylation to polymeric ubiquitin chains with complex topologies. To establish how ubiquitylation instructs cells to adopt a particular fate, it is critical to determine the type of the relevant ubiquitin modification and to understand the mechanism by which this signal is generated. In most cases, we are addressing these questions by exploiting a combination of biochemistry and structural biology. This work has allowed us to identify the first function of an atypical ubiquitin chain (K11-linked chains that are formed in mitosis; Jin et al., Cell 2008) or the first function of branched ubiquitin chains (they drive degradation of difficult proteasomal substrates; Meyer and Rape, Cell 2014). In addition, we revealed several aspects of ubiquitin chain assembly, including the use of substrate-assisted catalysis to establish linkage specificity (Wickliffe et al., Cell 2011) or the ability of ubiquitylation enzymes to track the end of a growing ubiquitin chain (Kelly et al., Mol. Cell 2014). Much of our current work in this area focuses on branched ubiquitin chains, i.e. dissecting the mechanisms underlying branched chain production and function.

Can I change my mind?

It is a long-term goal of our lab to correct aberrant cell fate decisions that cause human diseases. We are pursuing this work with an emphasis on cancer as well as on pediatric diseases that are often caused by misguided stem cell differentiation. We have developed innovative small molecule-based strategies to activate ubiquitin ligases for cancer treatment, an approach that has allowed us to found a successful biotech company, Nurix. We are currently also employing genetic means to find new targets for actively changing cell fate for therapeutic benefit.

A complete list of publications can be found on Pubmed.