What happens when you touch a hot pan on the stove? You probably yell and yank your hand away. Between the sizzle and the scream though, an amazingly fast and complex cascade of cellular communication occurs inside your body.

To study the electrical intricacies of the nervous system, neurobiologist Ehud Isacoff is developing new optical methods that enable scientists to watch the cellular symphony unfold at the nanoscale.

Understanding the dynamic structure of neuronal proteins could lead to new treatments for diseases like cystic fibrosis, epilepsy, and some forms of paralysis, Isacoff says. The first step though is to take a long, hard look at the dynamics of ion channels, the tiny electrical gates in a cell's membrane that govern cellular transport and signaling.

"An ion channel operates like a transistor with extreme speed, at an extremely small scale, and with tremendous reliability," says Isacoff, professor of Molecular and Cellular Biology. "The question is how it works mechanistically."

Ion channels are proteins that function as pores to selectively let ions like sodium and potassium pass in and out of a cell. As the ion channels rapidly open and close, the voltage of the cell changes and a voltage wave is produced. The ion channels themselves are triggered by a change in voltage as well, enabling electrical impulses to propagate from cell to cell through the nervous system. 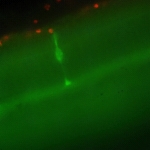