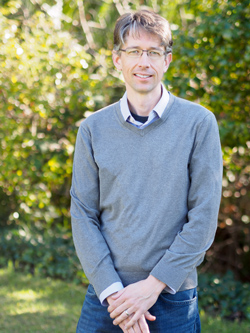 How do mammals defend themselves against the diverse world of microbial pathogens? This is a fundamental question that has intrigued biologists for over a century, yet new technologies continue to provide exciting advances. Given the continuing global burden of infectious disease, the study of host-pathogen interactions continues to be a pressing area of investigation.

Current work in my lab focuses on the following interrelated areas, all of which address the fundamental problem of how bacterial pathogens are sensed and eliminated by the innate immune system:

Innate immunity to Legionella pneumophila.  Many of our studies have focused on a gram-negative bacterium, Legionella pneumophila, the causative agent of a severe pneumonia called Legionnaires' Disease. Legionella has evolved a variety of sophisticated mechanisms for manipulating host cells, and is representative of a class of bacterial pathogens that grow intracellularly within specialized vacuoles that evade fusion with lysosomes. Legionella is also experimentally accessible, as it grows readily in vitro and can be genetically manipulated at will. We are interested in understanding how host cells detect the presence of Legionella and how this influences the outcome of infections in vivo.

Role of the NAIP 'inflammasomes' in immune defense against intracellular bacteria. Classical genetic studies have demonstrated that a host protein, called NAIP5, is essential for resistance to Legionella. NAIP5 is a member of a large class of 'pathogen-detector' proteins that are believed to coordinate host immune responses upon recognition of pathogen-derived molecules. Our studies have demonstrated that NAIP5 is a cytosolic detector of bacterial flagellin. Interestingly, we were also able to show that a related protein, called NAIP2, functions to detect a different protein derived from the secretion systems of pathogenic bacteria.  Once activated, both NAIP2 and NAIP5 assemble into large multi protein complexes, called the inflammasomes, that initiates potent inflammatory responses by activation of a downstream protease called Caspase-1.  In general the mechanisms of inflammasome activation remain poorly understood and are a major focus for the lab.

Detection of the bacterial toxins by the NLRP1 inflammasome.  NLRP1 is another innate immune sensor protein that is a relative of the NAIP proteins described above. NLRP1 also forms inflammasomes, but we have found that its mechanism of activation is distinct from that of the NAIPs.  In particular, we have found that direct proteolysis of NLRP1 by the anthrax protease toxin is sufficient to activate formation of the NLRP1 inflammasome.  We are interested in determining the biochemical mechanism for this response. In very recent work, we showed that a secreted enzyme produced by the intestinal pathogen Shigella flexneri, is also a potent activator of NLRP1. Surprisingly, the Shigella enzyme is a ubiquitin ligase, not a protease. We have therefore proposed that NLRP1 is a much more general sensor of pathogens than previously suspected.

The cGAS-STING pathway and detection of bacterial cyclic-di-nucleotides and DNA.  Another innate immune pathway that has caught our interest is a cytosolic immunosurveillance pathway that senses pathogen-derived nucleic acids.  One class of unusual nucleic acids are cyclic-di-nucleotides. These molecules include c-di-AMP and c-di-GMP that are produced by bacteria where they regulate various aspects of their physiology.  Since c-di-AMP and c-di-GMP are not made by mammalian hosts, they represent suitable targets for innate immune recognition.  Indeed, in collaboration with the Portnoy Lab on campus, we showed that the host protein STING functions as a direct mammalian sensor of cyclic dinucleotides.  We are continuing to investigate the mechanism by which STING senses nucleic acids and initiates protective host responses.  In particular, we are interested in a mammalian enzyme called cGAS that produces endogenous cyclic-di-nucleotides in response to the cytosolic presence of foreign DNA. In collaboration with the Hammond Lab at Berkeley, we showed that the cyclic-di-nucleotide produced by cGAS contains an unusual 2'-5' phosphodiester bond. We were able to show that this small chemical difference produces a significantly enhanced ability to activate the STING pathway in human cells.  In collaboration with the Doudna Lab on campus, we discovered that STING is an evolutionarily ancient protein and that a functional homolog is even found in Nematostella vectensis, a sea anemone >500 million years diverged from humans. By studying Nematostella, we are interested in discovering the evolutionarily ancient function of STING.

Tuberculosis. A nascent area of interest for the lab is the intracellular bacterial pathogen Mycobacterium tuberculosis (MTb). MTb currently infects about a third of the world's population, and causes more than a million deaths per year.  We lack an effective vaccine for this pathogen, and antibiotic therapies are increasingly problematic due to rising rates of multi-drug resistant infections.  The innate immune response to MTb remains poorly understood.  In collaboration with the Stanley and Cox labs on campus, we are undertaking a variety of approaches to better understand the remarkable success of this pathogen. We recently discovered that a negative regulator of immune responses, called interleukin-1 receptor antagonist, can be targeted as an effective host-directed therapy for MTb in mice.