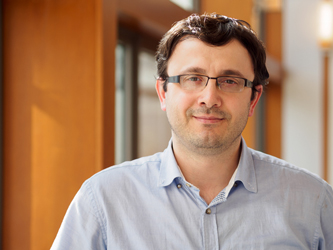 Professor of Biochemistry, Biophysics and Structural Biology*
*and of Physics

Eukaryotic cells are intricately organized on many length and time scales, from molecules to organelles. Much of this organization is achieved by motor proteins, which directionally transport intracellular components along cytoskeletal tracks (myosin on actin filaments, kinesin and dynein on microtubules). The Yildiz Laboratory combines biochemical and single-molecule biophysical techniques to understand how motor proteins move on microtubules long distances at fast speeds and produce the forces required to carry their cargo in a dense cytoplasm. Despite decades of extensive research, our understanding of how these motors are recruited to specific cargoes and how they deliver the cargoes to their correct destinations remains incomplete. Owing to recent progress in biochemical reconstitution and cryo-electron microscopy, we are now in a better position to model microtubule-based transport in vitro and start tackling these questions.

The Mechanism and Regulation of Dynein Motility: Dyneins make up a family of AAA+ motors that move toward the minus end of microtubules. Cytoplasmic dynein is responsible for transporting intracellular cargos in interphase cells and mediating spindle assembly and chromosome positioning during cell division. Other dynein isoforms transport cargos in cilia and power ciliary beating. Dyneins were the least studied of the cytoskeletal motors due to challenges in the reconstitution of active dynein complexes in vitro and the scarcity of high-resolution methods for in-depth structural and biophysical characterization of these motors. By using single-molecule fluorescence and optical trapping methods, Yildiz Laboratory presented a mechanistic model for the activation, ATP hydrolysis cycle, stepping, directionality, and force generation of functional dynein motors. We are now turning our attention to understand how dynein is regulated by accessory proteins. For example, Lis1 and NudE bind directly to dynein’s motor domain, and they are required for most, if not all, dynein functions in the cytoplasm of mammalian cells. Using in vitro motility assays and cryo-EM imaging, we aim to determine how Lis1/Nde1 and other associated factors facilitate dynein-driven transport in cells.

Reconstitution of Bidirectional Transport along Microtubules: Intracellular transport is tightly regulated by motors, adaptors, and other binding partners in a cargo-specific manner. The recent discovery of adaptor proteins that recruit kinesin and dynein to specific cargos raised the possibility that these adaptors also regulate the recruitment and activation of the motor proteins. To test this possibility, we reconstitute the bidirectional transport of macromolecular machinery responsible for intracellular trafficking of mitochondria and autophagosomes in vitro. We use single-molecule fluorescence and optical trapping assays to determine whether kinesin and dynein continuously or transiently engage in a tug-of-war or are tightly coordinated in trans by the cargo adaptor and other regulatory factors. We also use cryoEM to gain structural insight into how cargo adaptor binding regulates the assembly and activation of motor proteins. Next, we plan to perform these experiments in cultured neurons to investigate the cellular and molecular bases of neurodevelopmental and neurodegenerative diseases linked to the malfunction of these complexes.

Control of Bidirectional Transport by MAPs: Another open question is how cargoes are sorted inside cells and delivered over long distances to multiple destinations. It has been proposed that signals that regulate motor-driven transport are deposited onto the microtubule tracks, either by post-translational modifications of tubulin or structural proteins that decorate the microtubule surface, referred to as MAPs. While most MAPs compete with motors for space on the microtubule surface, several MAPs have been shown to recruit and activate specific motors on microtubule tracks. These observations gave rise to the “MAP code” model proposing that spatial patterning of the microtubule surface by distinct MAPs governs the recruitment and motility of motors along these tracks. However, the mechanism by which MAPs affect motor activity is still emerging. It remains unclear whether MAPs inhibit motors by overlapping with their binding sites, or by forming liquid condensates that exclude motors from the microtubule surface. We also do not know whether certain MAPs activate specific motors by directly recruiting them to microtubules or rescuing these motors from their autoinhibited conformations. We test these models by determining the microtubule-bound structures of MAPs and motors and tracking the stepping of motor proteins along MAP-decorated microtubules.