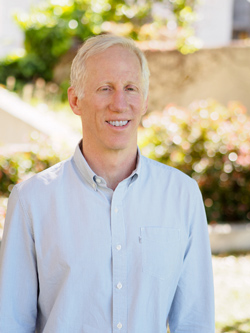 Richard and Rhoda Goldman Distinguished Chair in the Biological Sciences & Professor of Genetics, Genomics, Evolution, and Development*
**And Affiliate, Division of Cell and Developmental Biology

My laboratory uses budding yeast to study fundamental processes in cell biology. Our approach has been to develop novel genetic reagents and cell biological methods to analyze these complex processes in vivo, coupled with the development and exploitation of in vitro assays to reveal underlying molecular mechanisms. Together these approaches have allowed us to make significant contributions to following three areas of research.

Higher-order organization of chromosomes is essential for chromosome segregation, DNA damage repair, and the regulation of gene expression. From bacterial to human cells, higher-order chromosome structure is mediated by a conserved family of protein complexes named after their shared SMC (Structural Maintenance of Chromosomes) subunits. Mutations in SMC subunits help drive cancer and cause age-dependent congenital disabilities and developmental disorders. SMC complexes have two activities that structure chromosomes. First, they tether together two regions of DNA, either within a single DNA molecule or between DNA molecules. Second, by combining this tethering activity with their ability to translocate along DNA, SMC complexes can also extrude DNA loops (loop extrusion) in vivo and in vitro. Key questions about the biological and molecular functions of these remarkable complexes remain unanswered.

The SMC complex called cohesin is essential for sister chromatid cohesion and condensation as well as playing critical roles in DNA repair and gene expression. During the last five years, my laboratory used existing and novel assays to reveal that cohesin is a much more complicated machine than previously proposed and elucidated key new features of its DNA binding, DNA tethering, in vivo confirmation and oligomerization, loop extrusion, and regulation.

The complexity of cohesin's biological and biochemical functions pose many important unanswered questions. What are the molecular activities that allow cohesin both to translocate along DNA and to tether two regions of DNA? What regulatory mechanism(s) designate subsets of cohesins for tethering and loop extrusion? Initially the primary biological function of loop extrusion was thought to be the control of gene expression. However, more recent studies from our lab and others suggest that the majority of loops formed by cohesin are likely involved in a different aspect of chromosome metabolism. What is this mysterious function? To answer these questions, my lab interrogates cohesin's biochemical and biological functions by exploiting our extensive mutant collection in cohesin and cohesin regulators along with novel in vivo and in vitro assays developed by us and others.

Over the last decade, R-loops have emerged as a potent factor in chromosome function. R-loops form as a result of the hybridization of RNA to a homologous genomic locus. This hybridization generates a DNA-RNA hybrid and a displaced single-stranded DNA (ssDNA) segment. R-loops were known to regulate gene expression but also can induce sites of DNA damage that lead to gross chromosomal rearrangements. The genomic sites of R-loop formation were poorly defined, and the sites of R-loop induced damage were unknown in any organism. During the last five years, we developed novel methodologies in budding yeast to define with high precision sites of R-loop formation8 and sites of associated DNA damage. These genomic maps provided the foundation to identify for the first time causative genomic features for R-loop formation and to identify and characterize R-loop induced damage. This damage was found at only a subset of R-loops and always proximal to the 3’end of the RNA in the R-loop. These studies revealed that R-loop induced DNA damage is impacted by the structure of the R-loop and local genomic features. The unusual structure of the damage, coupled with our phenotypic characterization of mutants defective in hybrid removal, revealed a major new concept in R-loop induced genome instability; besides causing DNA damage, the persistence of R-loops impacts DNA repair by inhibiting normal pathways of recombination.

Important questions that remained to be answered R-loop induced genome instability. Why do only a subset of R-loops cause DNA damage? Are the types chromosomal rearrangements induced by R-loops dependent upon local chromosomal features?

Stress Biology through the Lens of Desiccation Tolerance

For over a century, model systems were chosen for their extreme behavior (fast cell division, shattering of genomes, amplified secretion, etc). These behaviors amplified signal to noise of fundamental processes, facilitating their study. Similarly, the extreme desiccation tolerance of anhydrobiotes (yeast, seeds, tardigrades, etc) provides an unusual window to study the stresses and stress response imposed by water loss. Because of the myriad of stresses that could be induced by water loss, desiccation tolerance seemed likely to require many established stress effectors. The sugar trehalose and hydrophilins (small, extremely divergent, and intrinsically-disordered proteins), had also been proposed as stress effectors against desiccation because they were found in nearly all anhydrobiotes and could mitigate desiccation-induced damage to model proteins and membranes in vitro. However, the identification of in vivo factors essential for desiccation tolerance and their in vivo function was missing. Using budding yeast as a model system, we demonstrated that high levels of both trehalose and the hydrophilin Hsp12 are necessary and sufficient for desiccation tolerance. They act, at least in part, by limiting in vivo protein aggregation and loss of membrane integrity. We showed that a subset of hydrophilins from animals can promote desiccation tolerance of yeast suggesting hydrophilins can have conserved function despite sequence divergence. However, we also showed that the efficiency of different hyrophilins to promote desiccation tolerance varied tremendously. This functional distinction suggested for the first time that hydrophilins have distinct functions despite their shared biophysical properties. Finally, we showed that trehalose and Hsp12 have functions for yeast in aqueous conditions. These studies demonstrated Hsp12 and trehalose as a novel in vivo stress factors and suggest that hydrophilins may be a class of uncharacterized stress factors.

The discovery of the potent stress effector function of Hsp12 and trehalose raises several important questions. Both trehalose and Hsp12 are expressed in response to heat shock in aqueous conditions, implying they have functions independent of desiccation tolerance. What are these functions? Does the in vitro membrane vesicularization by Hsp12 reflect a biological function to help repair membrane damage? What are the functions of the other 11 hydrophilins in yeast? Can our knowledge of yeast hydrophilins be leveraged to improve draught tolerance of plants?