A new research paper published in Nature Cell Biology from the lab of MCB Assistant Professor Roberto Zoncu reveals surprising new observations on the mechanism of activation of the master growth regulator mTORC1, a protein kinase implicated in cancer, diabetes and neurodegeneration.

Combining dynamic live cell imaging with a first-of-its-kind in vitro reconstitution of the mTORC1 activation process, Zoncu, along with MCB graduate student Rosalie Lawrence and colleagues, identified a ‘molecular brake’ that makes mTORC1 activation intrinsically inefficient. Specifically, this molecular brake limits the amount of mTORC1 that is allowed to bind to the membrane of lysosomes, the cellular sites where mTORC1 encounters its substrates and launches its downstream programs for cell growth and proliferation.

Supporting the physiological relevance of this mechanism, the authors show that mutations in mTORC1 pathway components that were recently identified in human cancers effectively disable the brake and boost the amount of mTORC1 that can bind to the lysosome, thereby enhancing its pro-oncogenic signals.

This work points to the machinery for mTORC1 lysosomal recruitment as a novel therapeutic target in several human cancers that are driven by excess mTORC1 signaling. 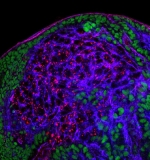