More than 100 years ago, Theodor Boveri proposed that errors in the segregation of genetic material (chromosomes) to two daughter cells during cell division could be a cause of cancer.Furthermore, chromosome segregation defects during meiotic germ cell divisions are responsible for many spontaneous abortions and can lead to birth defects such as Down syndrome. Despite its fundamental importance very little is known about the molecular origins of these potentially devastating errors.

The segregation of chromosomes is mediated by a macromolecular machine called the mitotic spindle. The mitotic spindle is composed primarily of microtubules, a polymer of the protein tubulin, along with many associated proteins that regulate tubulin polymerization dynamics and microtubule organization. In addition, the attachment of spindle microtubules to chromosomes and their alignment and distribution are highly orchestrated by many factors. The assembly and function of the mitotic spindle has long been thought to be mediated solely by proteins, but a recent study from the Weis and Heald labs at UC Berkeley published in the April 22 issue of Cell has now revealed an unexpected role for RNA in spindle assembly and chromosome segregation.

Using eggs from the African frog, Xenopus laevis, Blower et al. identified the RNA associated protein Rae1 as a new factor required for spindle formation. Rae1 is found in a large complex containing both proteins and RNA, and intriguingly the Rae1 complex requires RNA for its spindle assembly activity. Furthermore, the authors found that RNA specifically associates with the mitotic spindle and that RNA plays a structural role in spindle assembly. This study reveals an unexpected function for RNA in spindle morphogenesis and suggests that assembly and function of the mitotic spindle will be more complicated than previously thought.

Given the recent explosion of studies indicating a role for noncoding RNA in the regulation of various cellular processes, it will be interesting to determine what types of RNAs are associated with the mitotic spindle, and whether these RNAs play an active or passive role in spindle morphogenesis. Further insight into the molecular role of RNA in spindle morphogenesis could give insight into changes that occur in cancer cells and could someday lead to additional cancer therapies. 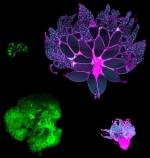