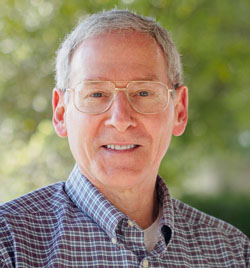 Although I retired from active faculty service (as of 1 July 2020), I continued to teach full-time (one last time) in academic year 2020-21.  However, research operations in my laboratory closed down, permanently, on 30 June 2021.  During the past several years, most of our research efforts were focused on the following projects.  See also citations to published work below.

Protein kinases that control plasma membrane lipid homeostasis. We have shown that Ypk1, a member of the AGC class of protein kinases conserved from yeast to humans, is the essential target of and activated via phosphorylation by the plasma membrane-associated TORC2 complex. Ypk1, in turn, regulates (via its phosphorylation of multiple substrates) maintenance of sphingolipid and glycerolipid homeostasis and bilayer lipid organization in the plasma membrane. We have recently shown that this same pathway modulates the content of integral membrane proteins and, in collaborative studies, that it is also involved in maintenance of the sterol composition of the plasma membrane. For these reasons, this pathway and the mechanisms by which TORC2 and Ypk1 are regulated are under continuing intensive study.  In this regard, we have recently shown that efficient activation of Ypk1 by TORC2 requires stimulation of TORC2 by the GTP-bound state of a Rab5 GTPase (Vps21/Ypt51) and that, in turn, Rab5-dependent endocytosis may be a mechanism to down-regulate TORC2 signaling after it has been activated.

Previous research projects that, in some cases, are also on-going in collaboration with former graduate students or former postdoctoral fellows, or with collaborators on this campus or elsewhere, include:

The roles of septins and septin-associated protein kinases in cell morphogenesis and cell cycle control. The Wee1 class of protein-tyrosine kinase has an important role in cell cycle control. We investigated control mechanisms that regulate the activity, localization, and stability of Wee1, especially the bud neck-localized protein kinase Hsl1 and its more distant paralogs (Gin4 and Kcc4), in particular their recruitment to septin filaments, which assemble at the presumptive site of cell division. We have shown that septin filaments are assembled from hetero-octameric complexes containing two each of four different septin subunits.  We also studied the roles of other classes of protein kinases (Cla4) and additional post-translational modifications (SUMOylation) in septin complex assembly, formation of different septin-based supramolecular ensembles, disassembly of septin-containing structures, and the function of septin organization in the events required for cell division and membrane septation during cytokinesis. Our past studies on septin ultrastructure were, in many cases, conducted in close collaboration with our colleague Prof. Eva Nogales in our Division (BBS) of MCB.

Structural analysis of a peptide hormone receptor. To understand the molecular biology of peptide hormone action, we studied response of budding yeast (Saccharomyces cerevisiae) to its peptide mating pheromones (a-factor and α-factor). The pheromone receptors have seven hydrophobic segments and are coupled to a heterotrimeric G protein. Receptors of this type are ubiquitous and transduce binding of a wide variety of extracellular ligands (peptide hormones, neurotransmitters and other bioactive compounds) into a physiological signal. Attempts to determine the three-dimensional structure of the purified α-factor receptor by NMR and X-ray crystallography are still underway in collaborative studies with a group in Switzerland. We were also interested in proteins involved in adaptation and recovery after the pheromone-induced signal, especially:  structure and function of Sst2, the prototype RGS (Regulator of G-protein Signaling) protein; α-arrestins involved in selective ubiquitinylation and endocytosis of integral membrane proteins, including the pheromone receptors; and, various classes of phosphotyrosine-directed, phosphoserine- / phosphothreonine-directed, and dual-specificity phosphoprotein phosphatases that dephosphorylate activated MAPKs.

Molecular genetics and biochemistry of MAPK cascades. Activation of the pheromone receptor-coupled G protein initiates a four-tiered cascade of protein kinases, ultimately resulting in stimulation of a messenger-activated protein kinase or MAPK (Fus3) that translocates into the nucleus. A different developmental pathway (invasive or filamentous growth) triggered by nutrient limitation stimulates another MAPK (Kss1). Subjecting cells to hyperosmotic conditions activates yet another MAPK (Hog1). Thus, MAPK cascades are universally employed in eukaryotic cells for mounting an appropriate response to an extracellular stimulus and, like yeast, every eukaryotic cell contains multiple MAPK pathways. We investigate intensively the mechanisms that impose specificity and fidelity at each tier in these signaling networks. We showed that one device used by the cell for discrimination between parallel MAPK pathways is a specific docking interaction between a MAPK and the N-terminus of its cognate upstream protein kinase (MEK). We also showed that the scaffold protein Ste5 helps ensure signaling fidelity in pheromone response by binding the appropriate MAPK (Fus3), MEK (Ste7), and upstream activating kinase or MEKK (Ste11) and by shuttling from the nucleus to the plasma membrane, thereby delivering the MAPK module to its most proximal activator— a fourth plasma membrane-associated protein kinase (Ste20). A different scaffold protein, Ste50, is required for signal propagation in the invasive growth and hyperosmotic stress response pathways was also studied. The roles of other factors that prevent inappropriate MAPK activation in response to a given stimulus were investigated using genetic and biochemical methods.

Molecular biology of phosphoinositide-dependent signaling.  We showed that phosphatidylinositol 4-phosphate generated by a particular phosphatidylinositol 4-kinase isoform (Pik1) has a specific role in the Golgi body-to-plasma membrane stage of the secretory pathway. This enzyme also has an essential role in supplying the PtdIns(4)P that is converted to PtdIns(4,5)P2 in the nucleus, where it is hydrolyzed by a specific phospholipase C to generate inositol polyphosphates that regulate transcription, chromatin remodeling and mRNA export. We found that the phosphatidylinositol 4-kinase is also regulated by a small calcium-binding protein whose ortholog in animal cells (frequenin or neuronal calcium sensor-1) is found mainly in neuronal and neuroendocrine cells.  In other work, we explored the roles of phosphoinositides and other lipids in cell polarization, cell division and cell signaling.

Novel mechanisms for translocation across membranes. We discovered that export of the a-factor pheromone requires an integral plasma membrane protein that is a dedicated ATP-dependent transporter, rather than the classical secretory pathway. The mechanism of transmembrane translocation of pheromone by the transporter (Ste6) was examined. The functions of other members of the same transporter class, namely ABC transporters, were also studied.  Conversely, inward translocation of certain lipids from the outer to the inner leaflet of the plasma membrane is catalyzed by members of the class 4 P-type ATPase family, dubbed "flippases," which we also investigated.

McMurray MA, Thorner J (2019) Turning it inside out: the organization of human septin hetero-oligomers. Cytoskeleton (Hoboken) 76: 449-456.