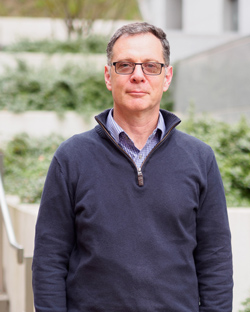 The interplay between proteins and membrane lipids is central to almost every aspect of cell biology. This laboratory is interested in fundamental questions of how the interactions between proteins and membranes determine cell and organelle shape and the evolution of shape over time, how protein-membrane interactions turn on and off the signals that control essential cell processes, and how pathogens such as HIV-1 subvert and co-opt these interactions. The roots of our research program are in the power of x-ray crystallography to reveal the structures of membrane-interacting proteins at high resolution, leading to insights in the physical basis of protein-membrane interactions. Crystallography continues to be at the heart of our research because of its unequaled power to reveal the shape of proteins and the atomic basis for protein-protein and protein-lipid interactions. The reconstitution of membrane remodeling pathways in synthetic membrane systems has taken on equal importance in the lab. These core approaches are complemented by studies in solution or on membranes by hydrodynamic, small angle x-ray scattering, fluorescence imaging, and electron microscopy.

The ESCRT complexes catalyze one of the most unusual and mysterious membrane remodeling reactions in the cell. ESCRTs are responsible for the formation of multivesicular bodies (MVBs) in eukaryotic cells, remarkable structures that are required for transport of receptors and other membrane proteins to the lysosome. ESCRTs promote the budding of membrane away from cytosol, in other words, in the opposite direction from clathrin and other vesicle coats. The ESCRTs appear to promote this unusual mode of budding by forming an assembly at the bud neck, so as to temporarily stabilize the bud. The ESCRTs then go on to sever the membrane neck so as to release the bud. This membrane severing reaction is essential not only for MVB biogenesis, but also for the final severing of the narrow membrane neck separating two daughter cells during cytokinesis, for the release of microvesicles from the plasma membrane, and for the release of HIV-1 and a number of other viruses from the plasma membrane of infected cells. Our group has been developing a structural hypothesis for this unique membrane budding and severing pathway. The current focus of the lab is to understand at the structural and mechanistic level how the ESCRTs are co-opted by HIV-1 so as to release nascent virions from infected cells.

Autophagy is a form of cellular self-cannibalism that appears at first glance to be bizarre and harmful. Yet autophagy is conserved throughout eukaryotes and profoundly important for cellular health and survival. Defects in autophagy in single-celled organisms impair survival under starvation and stress. In humans, dysfunction in autophagy is linked to most of the major ailments of the developed world, including neurodegenerative diseases, cardiovascular disease, and cancer. Autophagy proceeds by the engulfment of cytosol, organelles, and inclusions by a growing double-membraned sheet. The double membrane becomes sealed and fuses with the lysosome (or vacuole in yeast), and its contents are hydrolyzed and recycled. Many, if not most, of the proteins required for autophagy have been identified, yet little is known about how they work with each other and with membranes to carry out this remarkable pathway. Our laboratory has solved the structure of a large portion of the Atg1 complex, which is responsible for initiating autophagy. We have developed a structural model for how the Atg1 complex might tether together the very earliest membrane vesicles involved in autophagosome biogenesis. The group now has a strong focus on building up an integrated structural model for autophagosome formation.

In comparison to the counter-intuitive and poorly understood ESCRT and autophagy pathways, far more is known about coated vesicle formation at the level of molecular mechanism. Because so much of the groundwork has already been done in this field, we can ask subtle and sophisticated questions about the structural mechanisms of regulation and the redirection of basic functions by pathogens. Cargo adaptors typically link membrane proteins to coat components. We have been focusing on the AP family of heterotetrameric adaptor complexes. We were recently able to resolve a question that had stood in this field for 20 years: how the small GTPase Arf1 activates AP complexes for cargo binding. Other current efforts focus on the multiple ways that HIV-1 subverts the normal functions of the AP complexes, redirecting them to undermine the cell’s own defenses. HIV-1:host interactions of this type are attractive as novel drug targets, because host proteins are not subject to the same rapid mutation as HIV proteins, and are therefore less susceptible to the emergence of drug resistance.