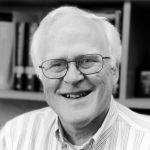 My lab is interested in determining the structure of large multiprotein complexes. We seek to understand the biochemical function of such systems at the level of molecular biophysics. Our primary research method is high-resolution electron microscopy of single-molecule specimens. In addition, however, we employ electron diffraction of two-dimensional crystals, X-ray diffraction of three dimensional crystals, and spectroscopic techniques when appropriate. A major portion of the effort in my lab continues to be the further development of EM methodology, the goals being (1) to extend such work to the resolution needed for chain tracing and (2) to make high-resolution studies possible for protein complexes with MW as low as 250 kDA.

Single-particle electron cryo-microscopy represents a potential alternative for high-throughput structure analysis, particularly for large macromolecular assemblies. One frontier of this technology is directed toward automating the recording of images of large numbers of particles.At the same time we are also developing highly parallelized and automated software tools to carry out the processing and merging of these data. As an initial goal, we expect that obtaining a 3-D structure at ~2 nm resolution can become a half-day project, i.e. about as fast and as easy as running a gel of the same protein. Ultimately we believe that sub-nanometer resolution will be possible with an amount of human effort that is comparable to what is required to purify the protein complex, and determining an ab initio atomic model will be a straight forward process for particles that are large enough and are sufficiently homogeneous in conformation.

We are also working to improve the quality of images that are recorded with state-of-the-art electron microscopes, in order to reduce the amount of data that must be merged in order to generate a high-resolution density map. Recent work that we have published in this direction seeks to understand the physical mechanism(s), such as specimen charging or beam-induced movement, that cause the high-resolution signal to be less in images than it is in electron diffraction patterns of the same specimen.

In a separate direction, we have begun to develop technology for in-focus phase contrast, similar in principle to that which is commonplace in light microscopy. Our approach uses microfabricated electrodes that are placed on-axis within the objective aperture, in order to apply a 90-degree phase shift to the unscattered component of the electron wave. It is expected that this technology  will result in much better preservation of high-resolution information under conditions where particles can be easily identified for inclusion in a data set. In addition, it is expected that in-focus phase-contrast images will make it easier to discriminate particles that are in different conformational states and sort them into data sets that produce three-dimensional reconstructions that are less "smeared" due to conformational heterogeneity.

Stroboscopic image capture: reducing the dose per frame by a factor of 30 does not prevent beam-induced specimen movement in paraffin. [D. Typke, C.J. Gilpin, K.H. Downing, and R.M. Glaeser (2007) Ultramicroscopy 107, 106-115]

Electron microscopy of biological macromolecules: bridging the gap between what physics allows and what we currently can get. [D. Typke, K. Downing, and R. Glaeser (2004) Microsc. Microanalysis 10, 21-27]