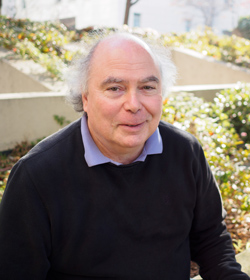 The general interest of our laboratory is nucleic acid transactions, specifically, the mechanisms used to mobilize transposable DNA elements (a process called transposition) and how RNA binding proteins control patterns of alternative pre-mRNA splicing.  About half the human genome is composed of transposons; transposable DNA insertions have been linked to human disease gene mutations and chromosomal rearrangements and are thought to be important for genome and organismal evolution. Our research focuses on the P element family of transposable elements found in the fruit fly, Drosophila melanogaster.   P element transposition is related to retroviral DNA integration, such as HIV, and to the process by which immunoglobulin and T-cell receptor genes are rearranged in the vertebrate immune system [V(D)J recombination]. Recent genome sequencing efforts have revealed that P element-related genes (called THAP9) are present in vertebrates, including humans and zebrafish, but are absent from rodents.  The P element system offers the ability to effectively combine the use of biochemical, genetic, molecular biological and proteomic approaches to study fundamental aspects of gene regulation, genome rearrangements and transposition mechanisms.  A second research area involves how patterns of alternative splicing of pre-mRNA are set up in a cell-type and tissue-specific manner, which is an important mechanism for the regulation of gene expression, evolution of organismal complexity in metazoans and leads to significant proteomic diversification. Understanding how pre-mRNA splicing is controlled will be important since at least 40% of the known human and mouse disease gene mutations affect the splicing process. Our studies deal with the interaction of proteins with RNA and DNA as well as the assembly, composition, structure, function and biochemical activities of these complex nucleoprotein machines. 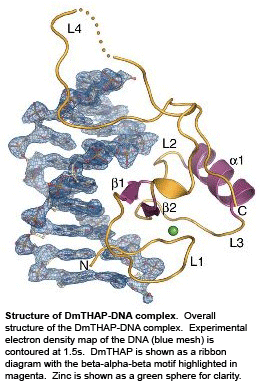 Biochemistry of P element transposase, the mechanism of transposition and P element-related THAP 9 genes in humans and zebrafish.   The 87kD P element-encoded transposase protein is required to catalyze P element transposition and belongs to a large polynucleotidyl transferase superfamily, that includes RNaseH, RuvC, retroviral integrases, transposases and the argonaute proteins.  Biochemical studies using the purified protein revealed that guanosine triphosphate  (GTP) is an essential cofactor for the reaction.  Current studies involve the use of imaging methods, including atomic force microscopy (AFM), electron microscopy (EM) and total internal reflection fluorescence microscopy (TIRFM) to understand the role(s) that GTP plays in transposition, the detailed reaction pathway and how this cofactor modulates the assembly and activity of transposase on DNA.  We are also interested in using X-ray crystallography to study P element transposase bound to DNA, and initially in collaboration with James Berger’s lab, have solved the structure of the N-terminal THAP DNA binding domain (DmTHAP bound to DNA; see figure below).  The C2CH zinc-coordinating THAP DNA binding domain is found in many animal genomes in >300 genes.  Interestingly, the THAP9 gene in humans and zebrafish shares extensive sequence homology to the Drosophila P element transposase.   We have recently shown that both the human and zebrafish THAP9 proteins can mobilize P elements in human and Drosophila cells.

Biochemistry and genome-wide analysis of alternative pre-mRNA splicing and splicing silencer function in Drosophila.   The P element transposon pre-mRNA undergoes tissue-specific splicing and we showed that regulation of the third P element intron (IVS3) involves RNA binding proteins (PSI, hrp48, hrp36 and hrp38) that recognize an exonic splicing silencer (ESS) regulatory RNA element in the 5' exon adjacent to IVS3, resulting in splicing inhibition.  This RNA silencer element binds the splicing repressor protein PSI (P element somatic inhibitor) protein which directly interacts with U1 snRNP and modulates U1 snRNP binding to specific sites on the pre-mRNA.  We are using bioinformatic and genomic (microarray and mRNA-seq) approaches to identify and characterize new splicing silencers that use the hrp48 and PSI factors in cellular genes.  We are employing biochemical reconstitution and purification, whole-genome tiling microarrays and mass spectrometry to identify cellular mRNAs and proteins present in RNP particles containing PSI, hrp48 and other splicing factors.  We are also using RNA tagging methods to purify and analyze the protein composition of RNP and splicing silencer complexes assembled in vitro and in vivo. We are interested in whether the incorporation of hnRNP proteins into RNP particles on nascent pre-mRNAs might generate a "code" that specifies how pre-mRNAs are processed. Another project involves a Drosophila paralog of the splicing factor U2 snRNP auxiliary factor (U2AF) that appears to act as a splicing silencer. Finally, we are investigating the roles of the microRNA pathway gene, Argonaute-2 (Ago-2), in the nucleus.  Using mutants, RNAi and RNA-seq our data indicate that Ago-2 determines genome-wide patterns of alternative pre-mRNA splicing and Polycomb-group (PcG)-mediated transcriptional repression in Drosophila.