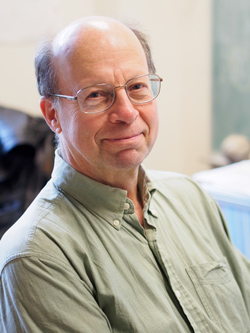 Professor of Cell Biology, Development and Physiology*
*And Affiliate, Division of Neurobiology

Molecular phylogenies indicate that most bilaterally symmetric animals fall into three major groups, whose ancestors had already diverged by the time of the Cambrian explosion, ~600 million years ago: Deuterostomia (echinoderms, hemichordates and chordates); Edysozoa (arthropods, nematodes and other "cuticle-shedding" animals); and Lophotrochozoa (annelids, mollusks, non-acoel flatworms, and a number of related minor phyla). Comparing modern representatives of all three of these groups is essential to understanding how changes in developmental processes have enabled the evolution of diverse body plans, but most developmental analyses have focused on a few model systems within Ecdysozoa and Deuterostomia. Leeches (phylum Annnelida, segmented worms) are regarded by some with a repugnance so intense as to preclude their consideration as objects for biological investigation. But in fact glossiphoniid leech embryos are quite beautiful and are well suited for cellular and molecular analyses of embryonic development. Thus, they are among the best studied representatives of the Lophotrochozoa.

The goals of the research in our lab are twofold: first, to obtain as satisfying as possible an understanding of leech development; and second, to understand how developmental processes are modified during the evolution of different animal taxa. For example, leeches undergo spiral cleavages homologous to those of mollusks, yet generate a segmented body plan, like arthropods. How have cell fates been modified among the different spirally cleaving animal groups to generate different types of embryos and adults? In particular, how is it that leeches make exactly 32 segments during development and cannot make more, either post-embryonically or in response to injury, while closely related annelids (oligochaetes) exhibit wonderful capacities for post-embryonic segmentation, regeneration, and even vegetative reproduction? And finally, what can we conclude from the similarities and differences among annelid, arthropod and vertebrate systems about the evolutionary origin(s) of segmentation?

Our relatively detailed understanding of Helobdella development compared to other "non-model" organisms led to its selection as among the first lophotrochozoan species for BAC library construction (at CHORI in Oakland with NSF support) and genome sequencing (by the JGI in Walnut Creek with support from DOE); a database of ~140,000 ESTs was created to aid in annotation. These genomic resources provide an important reference for comparative bioinformatics and greatly facilitate our studies of Helobdella development.

Two areas of primary interest at present are:

(1) the deployment, function and interconnection of intercellular signaling pathways (WNT, NOTCH, TGFbeta and MAPK) in the early embryo, including dynamic gene expression and transcriptome analysis during the 2-cell stage and the assignment of distinct mesodermal and ectodermal fates to two sister cells at 4th cleavage;

Our work entails the use of various cellular, molecular and embryological techniques. Microinjection of cell lineage tracers and various imaging techniques are frequently used in combination with other procedures. In particular, injection of synthetic plasmids, mRNAs and/or antisense morpholino oligonucleotides into selected cells allows us to express markers, dominant negative and constitutively active versions of genes and/or knock down gene expression in specific parts of the embryo. We are particularly excited at the prospects of combining genomic and embryological approaches.