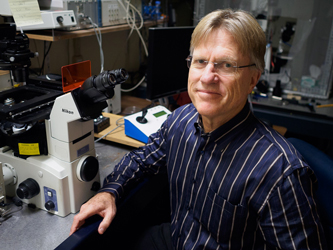 The general goal of our research since about 1995 has been to determine how lung airway epithelial cells respond to and prevent bacterial infections, particularly in the genetic disease cystic fibrosis.

The Cystic Fibrosis Transmembrane conductance Regulator (CFTR) is an anion channel located in the apical membrane of trachea and other secretory and absorptive epithelial cells. The genetic disease cystic fibrosis (CF) is caused by mutations in CFTR. In the past we used patch clamp and transepithelial electrophysiology to characterize the permeability properties of the CFTR channel to Cl-, HCO3- and other anions. We later combined electrophysiology with digital imaging microscopy and genetic targeting of green fluorescent protein (GFP) and organic fluorescent dyes to show that the most important function of CFTR is to mediate the secretion of Cl- an HCO3- in response to the presence of bacteria (most prominently Pseudomonas aeruginosa) in the airway lumen. In individuals afflicted with CF, reduced CFTR function results in altered luminal ionic milieu and accumulation of both viscous mucus with reduced activities of anti-bacterial products and also bacteria (most prominently Pseudomonas aeruginosa) and neutrophils. Disease symptoms result from the damaging effects of the bacteria, neutrophils and their secreted products.

Since retiring, I have focused on teaching in Bio1AL (Intro Biol lab) and MCB136 (Advanced Human Physiology) but have also remained involved in research through collaborations: (i) Chi Li  (U. Louisville) and his group are determining how the quorum-sensing molecule N-(3-oxo-acyl)-homoserine lactone (C12) secreted by P. aeruginosa triggers apoptosis (cell suicide) in airway epithelial cells. Paraoxonase 2 (a lactonase in airway epithelial cells) cleaves C12 to smaller molecules that activate a novel form of apoptosis that involves mitochondria but not the pro-apoptotic molecules Bax and Bak. Li and his group are trying to identify other small, C12-like molecules that can be used to treat cancers that are resistant to common drugs that activate Bax and Bak. (ii) With Christian Schwarzer (UCB) and Horst Fischer (Children's Hospital Oakland Research Institute) we showed that amino acids released from wounded or damaged airway epithelial cells are strong chemoattractants for P. aeruginosa to locate and bind to the cells. These bound bacteria may provide initial attachment sites for bacterial growth and persistence. (iii) Juan Ianowski and his group (U. Saskatchewan) have shown that P. aeruginosa trigger ion and fluid secretion from cells deep in the glands of tracheas in living pigs. Experiments in progress are testing whether local nerve networks control this secretion. Ianowski and his group are also testing whether in CF the small airways of the lungs may, in addition to suffering reduced Cl-, HCO3- and fluid secretion, also suffer from altered Na+ absorption.