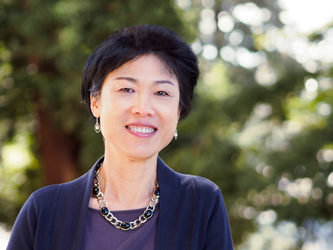 We are interested in the signal transduction pathways that regulate development and cancer. We employ in vitro mechanistic studies in tissue culture cells in combination with biological analyses using in vivo mouse models to understand how disruption of the normal signaling network leads to developmental defects and human cancer.

Currently, we focus on two important tumor suppressor pathways that also play important roles in regulating tissue development and homeostasis, the transforming growth factor-β (TGFβ)/Smad pathway and Hippo pathway. Since all intracellular signaling pathways eventually converge on the transcription machinery, and recent studies have shown that many developmental and growth regulatory genes are controled predominantly at the step of transcription elongation, we also investigate the specific function of various transcription elongation complexes in breast cancer progression.

The TGFβ family of cytokines, functioning through the Smad proteins, plays important roles in vertebrate development, carcinogenesis and malignant progression as well as epithelial-stromal interaction. The Smad proteins are transcription factors that upon phosphorylation by the receptor kinases, accumulate in the nucleus and regulate the expression of target genes. The activity of the Smad proteins is subjected to regulation by various cellular co-factors. SnoN and the related Ski proteins are critical negative modulators of the Smads by binding to and repressing their transcription activities. SnoN and Ski play important and complex roles in embryonic development and possess both oncogenic and tumor suppressor activities by regulating the proliferation, survival and senescence of cells. In addition to modulating TGFβ signaling, SnoN can also activate the p53 pathway in response to various cellular stress signals, through which it regulates aging, tumor progression and tissue regeneration.  More recently we show that both Ski and SnoN are important regulators of the Hippo pathway.

We are interested in understanding the functions of SnoN and Ski and how they coordinate the actions of various signaling pathways, in various aspects of development and in tumorigenesis using a combination of tissue culture cell lines, three-dimentional cutlure models and in vivo mouse models. Our current research focused on the following areas:

Role of SnoN in regulation of aging and adipose tissue development We recently showed that mice expressing a mutant SnoN defective in antagonizing TGFß signaling exhibited premature aging with a shortened life span, decreased reproductivity, osteoporosis and reduced regenerative capacity, as well as resistance to tumorigenesis, similar to that found in mice expressing an active p53. Subsequently we found that indeed, SnoN can activate p53 in response to cellular stress signals to promote cell senescence and tumor suppression. In addition, these mice also displayed a markedly reduced subcutaneous adipose tissue. By combining phenotype analysis in vivo with biochemical studies in in vitro preadipocyte differentiation models, we are determining the signaling mechanisms by which SnoN regulates adipocyte differentiation.

Regulation of Hippo signaling by SnoN/Ski during breast cancer progression Hippo pathway has recently been shown to regulate cell contact inhibition, organ size and cancer progression. Ski and SnoN appear to be important regulators of this pathway, in particularly, the activity of the TAZ/YAP proteins. We hypothesize that SnoN relays the signals from the cell polarity complexes to coordinate the activity of various intracellular signaling pathways.  In breast cancer cells, this signaling crosstalk regulates the expansion of breast cancer stem cells and tumor progression. We are investigating these regulatory mechanisms.