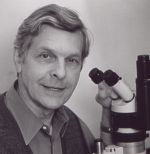 Professor of the Graduate School Division of Cell Biology, Development and Physiology

We study the early development of the amphibian Xenopus laevis, particularly the development of Spemann's organizer, which induces most dorsal and anterior structures of the embryonic body axis, those most characteristic of the chordate phylum.

We study cortical rotation, a 30° shift of the surface layer of the single-celled egg relative to the cytoplasmic core during the first cell cycle after fertilization. The direction of rotation is predictive of the site in the egg from which the organizer and dorsal structures develop. If rotation is blocked, the egg forms no organizer and develops as a radially symmetric "invertebrate" embryo with only a gut, red blood cells, and a ciliated epidermis. A dense array of parallel microtubules, which forms in the vegetal cortex of the normal egg, serves as tracks for rotation of the cortex. Rotation aligns these microtubules. Vesicles, organelles, and presumably informational molecules move along
the array, from the vegetal pole to the equator on the future clorsal side. We seek to identity of the key vegetal materials (a beta-catenin-stabilizing agent is the current leading candidate) and in the means of transport.

The second step of organizer formation occurs at the 4000-cell blastula stage. Cells of the dorsal vegetal region of the cleaved egg induce neighboring cells to form a portion of the organizer, as demonstrable by cell transplantation experiments. We seek to identify two secreted materials of this meso-endoderm induction, one maternal and one zygotic, the latter released by those cells receiving high beta-catenin levels from egg cytoplasm specialized by cortical rotation.