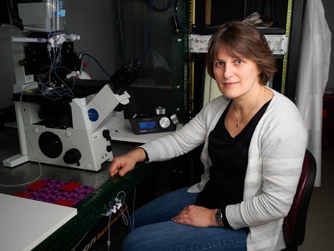 Research in our lab is focused on the cell biology of mammalian fertilization. We study the molecular mechanisms that regulate sperm motility, chemotaxis and the acrosome reaction. A better understanding of these processes will lead to the development of novel approaches to control and preserve male fertility, improve the human reproductive health worldwide and advance family planning. 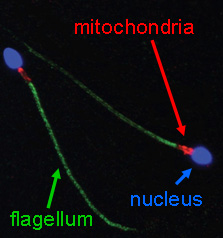 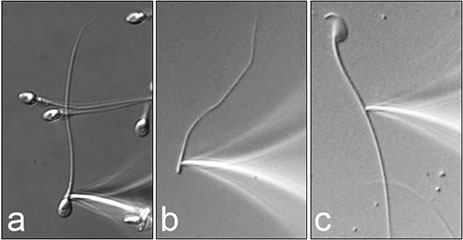 On its route to the egg inside the female reproductive tract, mammalian spermatozoa encounter multiple barriers: a viscous cervical mucus, cervical and uterine immune responses, the very narrow lumen of the uterotubal junction, the sticky and extremely complex maze formed by the epithelial folds of the Fallopian tubes, and finally the thick protective glycoprotein envelope (zona pellucida or ZP) of the egg itself. In order to overcome these numerous barriers and eventually fertilize the egg, the sperm cell must sense the cues released by the egg and change its swimming behavior. Sperm can achieve this by increasing the amplitude and driving force of their tail beating, change their direction of movement, and release special enzymes to dissolve the ZP. Such sperm responses depend upon electrical activity of the spermatozoon's plasma membrane which undergoes region-specific changes in ionic permeability in the female reproductive tract. Permeability of the sperm plasma membrane is controlled by ion channels. Ion channels are specialized integral membrane proteins that form ion-conducting pores in normally non-conducting membranes. Ion channels of the sperm cell open in response to environmental cues of the female reproductive tract, thus changing conductance of the sperm plasma membrane and sperm behavior.

The physiological importance of sperm ion channels has inspired numerous attempts to identify and characterize them. However, for about 20 years, these attempts had been frustrated by the inability to apply methods of contemporary biology to the sperm cells due to their small size, specific morphology and vigorous motility. The recently introduced sperm patch clamp technique has, in just a few years, produced a gigantic leap in our understanding of sperm ion channels. We use this method to study sperm ion channels and to shed light on the molecular mechanisms underpinning sperm-egg interaction and the environment of the female reproductive tract during the process of fertilization. This will help us to understand more about the early beginning of life, open new avenues in treatment of male infertility, and create novel male-specific or unisex contraceptives. Below are our on-going projects. Click on the project title to read more about it.