Ion channels are principal components of neuronal excitability and plasticity, and accomplish these tasks by responding to chemical and physical signals that regulate the flow of ions across cell membranes. The goal of our lab is to understand the operating principles of voltage-gated and ligand-gated ion channels. Our lab has combined electrophysiology, biochemical probing, and spectroscopy to understand the conformational changes of these channels, and their consequential functional states. To address these questions our lab has developed voltage clamp fluorometry (VCF) (Mannuzzu, Morronne & Isacoff, 1996; Glauner et al., 1999). In VCF ion channels are site-specifically labeled with environmentally-sensitive fluorophores or FRET dyes, so that changes in fluorescence pursuant to conformational changes can be measured simultaneously with current. We have used VCF to study the cooperativity between voltage-sensing domains (VSDs) in the dimeric voltage-gated proton channel Hv1 (Tombola et al., 2009), and the sequence of conformational changes that occur during pore opening (Mony, Berger & Isacoff, 2015). With VCF we have also demonstrated coupling between voltage-driven conformational changes of the VSD and catalytic activity of the voltage-sensing phosphatase Ci-VSP (Kohout et al., 2010). 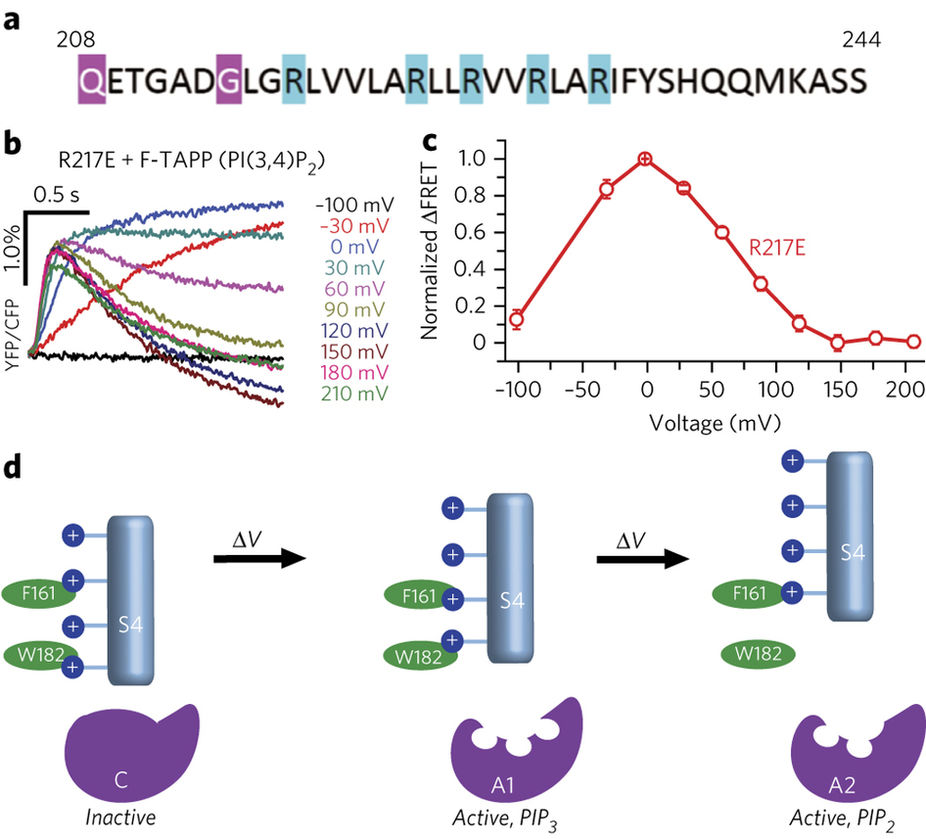 Our lab began our single molecule biophysics work studying the assembly and stoichiometry of the NMDA receptor (Ulbrich & Isacoff, 2007; Ulbrich & Isacoff, 2008), and have since expanded this to study the voltage-gated proton channel Hv1 (Tombola, Ulbrich & Isacoff, 2008), the kainate receptor (Reiner, Arant & Isacoff, 2012) and the calcium-activated chloride channel Bestrophin 1 (Bharill et al., 2014). We have developed methods for expressing these transmembrane proteins in Xenopus laevis oocytes and assaying their composition by counting photobleaching steps. We have recently implemented single-molecule pull down (SiMPull) to study the conformational dynamics of the metabotropic glutamate receptor with single molecule FRET (Vafabakhsh, Levitz & Isacoff, 2015). Future work in this arena will focus on the conformational dynamics and allosteric pathways of membrane proteins that tune the activity of neurons, shedding light on the mechanisms of synaptic plasticity, modulation of neurotransmission, and neurological disease.

Over the past few decades many efforts have been made to allow for the optical control and detection of neural activity. Fluorescent dyes have contributed much to our understanding of cellular signaling, but cannot be targeted to specific cell types or locations within cells. Our lab has developed methods to optically manipulate proteins themselves to overcome the spatio-temporal barriers of studying activity within and between neurons. Our lab has developed ion channels and receptors that bear covalently-tethered, photoisomerizable ligands. We have made light-regulated K+ channels (Banghart et al., 2004; Janovjak et al., 2010), ionotropic glutamate receptors (Volgraf et al., 2006; Gorostiza et al., 2007; Numano et al., 2009; Reiner et al., 2014, Berlin et al., 2016), and metabotropic glutamate receptors (Levitz et al., 2013). We have applied these tools in vivo to manipulate neural circuits in zebrafish (Szobota et al., 2007) and restore visual function in retinal degeneration model mice (Caporale et al., 2011; Gaub et al., 2014). Recently, we have created photo-activatable genetically encoded calcium indicators that integrate information about the structural connectivity of neurons with that of their activity (Berlin et al., 2015). Our goal is to continue developing these tools to study the details of synaptic plasticity and interrogate neural circuits in vivo.

Activity-dependent and independent mechanisms regulate synaptic size and strength to ensure a balance between excitation and inhibition of inputs and between input and output. This appears to be accomplished by integrated postsynaptic adjustment of synaptic receptors and retrograde signaling back to the presynaptic cell to adjust neurotransmitter release. The molecular mechanisms underlying these processes are not known. We are studying these processes in the model glutamatergic synapse of the Drosophila neuromuscular junction.

We are using multiple tools developed in the lab. The first is a postsynaptic targeted calcium sensor, which exclusively detects calcium influx through postsynaptic glutamate receptors thereby making it possible to image synaptic transmission at quantal resolution, enabling us to determine precisely the release properties of single active zones and define their mechanism of plasticity (Peled & Isacoff, 2011). More recently, we have employed these sensors to study transmission at the neuromuscular junction in vivo (Newman et al., 2017). The second method involves optical manipulation of chemically engineered glutamate receptors to determine the activity dependence of the retrograde transmission (Kauwe & Isacoff, 2013). Using these tools we have identified distinct sets of synapses that favor evoked versus spontaneous transmission (Peled, Newman & Isacoff, 2014). Moreover, we have found that homeostatic compensation for impaired neurotransmission occurs in an input-specific manner (Newman et al., 2017).

Ca2+ activity recorded in the motor neurons of a Drosophila larva subjected to a restrained crawling paradigm (Newman et al., 2017)

Circuits and behavior in zebrafish

Our lab uses zebrafish as a model to study the development and function of neural circuits with molecular tools developed by our lab and others. Our lab’s research has been focused primarily on how the development of the spinal cord gives rise to swimming behavior and how the optic tectum filters information to produce behaviors like prey capture.

Rhythmic behaviors, such as walking and swimming, are produced by neural networks called central pattern generators (CPGs). Using light-gated ionotropic glutamate channels, we have identified a specific population of CSF-containing spinal neurons that control slow swims (Wyart et al., 2009). The development of this circuit is characterized by a transition from sporadic, uncorrelated firing to rhythmic, correlated firing. Using optogenetic tools we have determined that inhibition of specific neuronal populations in the spinal cord prevents the transition to patterned activity (Warp et al., 2012). More recently we have demonstrated that non-visual opsins in the zebrafish spinal cord are activated by environmental light, and inhibit early spontaneous activity during development (Friedmann et al., 2015).

Visual detection of prey relies on processing information from retina by the optic tectum of zebrafish. Using genetically encoded calcium indicators, our lab has found a population of GABAergic interneurons that filter out larger objects in the field of view, resulting in selectivity for small, prey-like objects (Del Bene et al., 2010). Future work will focus on how experience shapes neural circuits involved in zebrafish prey capture.

Spontaneous coiling (left) is the first motor behavior of zebrafish, which occurs during their embryonic stage. This spontaneous activity transitions into the patterned activity that gives rise to swimming (right) (Warp et al., 2012)